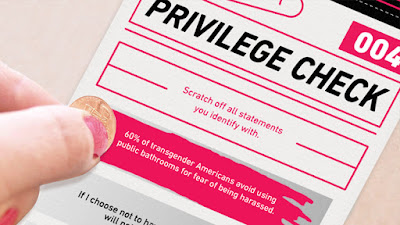 Adweek spotlighted a patronizing promotion presented at the latest soiree of The 3% Movement. Created by San Francisco-based Heat, the concept challenged attendees to “check their privileges” along with their coats. The onsite gimmick directed people to an online gimmick, ultimately showing how everyone is splintering in diverse divertsity directions, seeking to address every marginalized group out there. What’s most outrageous is that the majority of The 3% Movement fans—White women and White men—have historically leveraged their White privilege to dominate the advertising industry, quash any attempts at progress and hijack all equality discussions. An original idea would have been for the coat-check staff to deliberately lose attendees’ items. Instead, at the end of the girlfriend get-together, the pseudo crusaders got their White privileges back along with their designer hats and coats. 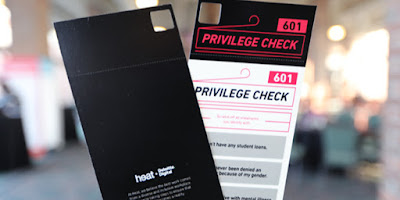 At the seventh annual 3 Percent Conference, which is being held Thursday through Friday in Chicago this year, Deloitte-owned Heat wants guests to be “as aware of your privileges as the coat on your back,” senior brand strategist Catherine Dailey told Adweek.

The San Francisco-based shop is operating a coat check—positioned directly next to where guests sign into the event—that doesn’t just take outer layers. Each person that checks a coat with Heat will receive a ticket stub with scratch-off statements shedding light on certain privileges many mainstream individuals in the U.S. take for granted.

The privileges include: “I have never had to ‘come out.’ I have never gone to bed hungry. I am not taught to fear walking alone after dark in average public spaces. I can afford to visit a healthcare professional multiple times a year. I can go to new places knowing that there’ll be a bathroom I can use. I am not nervous in airport security lines. I do not have a disability.”

Guests are intended to scratch off which privileges with which they identify, revealing facts angled to open their minds a bit about their advantages, such as: “Sixty percent of transgender Americans avoid using public bathrooms for fear of being harassed. Only four states offer third gender options on birth certificates. Ninety-four percent of teen females have experienced body shame. Only 46 percent of working-age adults with learning disabilities are employed.”

While tickets varied in terms of listed privileges, they all ended the same: “I want to do better.” When scratched off, this message is revealed: “By acknowledging our privileges, we can work to create opportunities for everyone, building a more diverse and inclusive world.”

A diverse team of Heat employees collaborated on the project, discussing what biases they face in their own daily lives that then fueled the list of privileges, according to Dailey.

Heat copywriter Rebecca Wang, who was instrumental in creating that list, said there are lessons to be learned for all.

Dailey admitted that she was not consciously aware of how many public spaces in 2018 are still inaccessible to people with certain disabilities until she began working for her current boss, whose husband is in a wheelchair.

“I notice more when I go places, which have wheelchair access,” Dailey said, who now always double checks that Heat’s out-of-office gatherings like happy hours are held at accessible places.

Once you’re aware of your privileges, Wang explained, you can use them to “help others.” Heat hopes each 3 Percent Conference attendee walks away with a heightened sense of consciousness and empathy, she said.

That, and their coats.

Tickets given to people who visit the coat check direct back to Heat’s website, which features a digital privilege check during the two-day conference. Resources on Heat’s commitment to diversity and inclusion are included on the landing page. The project is also being supported on the agency’s social channels. 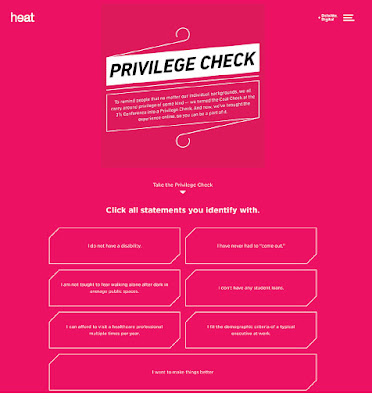