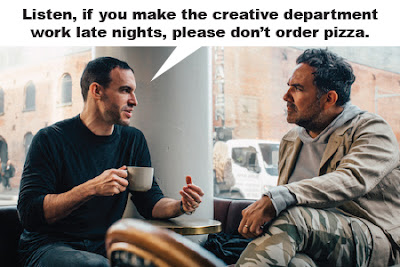 AgencySpy posted on the latest happenings at Laundry Service, spotlighting the hiring of Leo Macias as Global Chief Creative Officer and the promotion of Jordan Fox as Head of Laundry Service and sister shop Cycle. Senior leadership defined authenticity, collaboration, diversity/inclusion and meaningful work as the “philosophical and cultural” pillars of the enterprise. Okay, but it’s becoming a tired trend for shops to recruit foreigners for executive positions and label it as diversity in action. Plus, has Casey Wasserman—CEO of parent company Wasserman—ever delivered on his promise to “go on record and refute” the accusations against the firm made by former Papa John’s mascot John Schnatter? Inquiring minds want to know.

Macias will officially begin in his role on December 10 and report directly to Fox.

“Leo is a brilliant creative mind with a track record of successfully building and leading world-class global teams. He’s unbound by convention, and shares our philosophy that meaningful work happens through diverse thought, collaboration and authenticity,” Fox said in a statement. “His positive energy is inspiring, and together we look forward to (continuing to build) meaningful relationships between brands and people.”

Fox and the senior leadership team have identified and articulated “Authenticity; Collaboration; Diversity/Inclusion; & Meaningful Work” as the agency’s “philosophical and cultural” pillars as it enters its next era, while promising an increased focus on collaboration and a commitment to transparency and the “deliberate” and “thoughtful” pursuit of growth.

“Jordan (Fox) has exhibited strong leadership and has worked to establish a collaborative environment focused on cultivating great talent and delivering for our partners,” Wasserman CEO Casey Wasserman said in a statement. “His understanding of our business and command of culture and marketing will drive his success as head of Laundry Service and Cycle.”

Laundry Service played a central role in this summer’s Papa John’s saga. Papa John’s founder and former chairman John Schnatter claimed that unspecified Laundry Service employees had “pressured” him into a conversation in which he used racist language and attempted to “extort” his company to the tune of $6 million before ultimately leaking the news. An internal memo from an unnamed Laundry Service executive denied Schnatter’s claims and advised agency employees to avoid discussing the matter with the press.