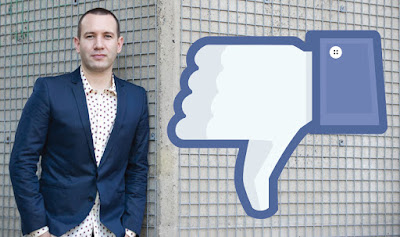 “It’s about time we take a collective stand against the egregious behavior of Facebook. Every time these sorts of stories [about privacy issues] surface they assure us that they are ‘trying harder’… enough is enough. I will be advising clients to stay off the platform entirely—hopefully, when they feel the pain of lost advertising dollars things might just change.”

For starters, a media wonk condemning bad behavior from others is pot-calling-the-kickback-black bullshit of the highest order.

It’s even zanier for the leader of Initiative to take such a holier-than-thou stance when the shop opened the year facing a lawsuit from an ex-associate claiming she was sexually assaulted by a Dr Pepper client—and the victim accused the White media agency of responding by trying to move her to a different account.

It’s also a little crazy that Initiative—which is part of IPG—would attack Facebook, considering the White holding company has been in bed with the social media service since at least 2006. There’s no doubt IPG has financially benefited from an exclusive relationship with Facebook, selling clients on the popular website. In 2011, IPG collected over $130 million in cash by selling part of its Facebook shares, a deal that received harsh criticism from the trade press. In 2012, an ex-executive filed a $381 million lawsuit demanding compensation for allegedly setting up the IPG-Facebook partnership. No offense, but Initiative now comes off like an angry pimp slapping a profitable hooker.

Most outrageous is Baxter’s tone and tiff, especially when held against the IPG character relating to diversity and divertsity. Here is a corporate entity always boasting leadership in inclusion, yet its walk never matches its talk. The faux advocacy for racial, ethnic, gender, generational, sexual orientation, disabled, neurological, house pets, etc. equality is contrasted by consistently crappy, conniving, cunning, criminal cultural cluelessness. And when the hypocritical lack of progress is called out, the responses are, “We’re on it” and “We’ve got to do better.” Enough is enough, indeed.

Before berating Facebook, Baxter better look in the mirror at his own face.

Are advertisers ‘on the cusp of a mighty rebellion’ against the social service?

The CEO of a major media agency has harsh words for Facebook and is urging clients to steer clear—feeding a debate about whether the recent barrage of privacy issues in digital advertising will lead to clients pulling ad dollars.

“It’s about time we take a collective stand against the egregious behavior of Facebook,” Mat Baxter, global CEO of Interpublic Group of Cos.-owned media agency Initiative, posted on LinkedIn Wednesday. His post linked to a Business Insider story that said Facebook allowed Netflix and Spotify to access users’ private messages. “Every time these sorts of stories surface they assure us that they are ‘trying harder’… enough is enough. I will be advising clients to stay off the platform entirely—hopefully, when they feel the pain of lost advertising dollars things might just change.”

Though issues have plagued Facebook as of late, advertisers have more or less turned a blind eye and continued spending on the platform.

Facebook’s VP of global marketing solutions Carolyn Everson said in an emailed statement the tech company has been accused of not respecting people’s privacy settings and disclosing private messages to partners without their knowledge. “To reiterate, that is not true,” she said. On Tuesday, the tech company published a blog post titled “Let’s Clear Up a Few Things About Facebook’s Partners.”

“People have questions about how Facebook uses information and what controls we give them,” Everson said. “We clearly need to do more to educate them about their privacy options. This is a big focus for us heading into 2019.”

“Every day we work hand-in-hand with our advertising partners to help them grow their businesses and better serve their customers,” she continued. “We have a strong partnership with IPG agencies around the world and look forward to that continuing for years to come.”

“As an independent advisor to clients, we navigate a complex media environment and must balance audience engagement with brand safety,” he said. “We look to all media platforms to be transparent about their usage of consumer data and will continue to work closely with our media partners, including Facebook, to ensure we have the highest data and privacy standards for our clients.”

In a research note, Pivotal Research senior analyst Brian Wieser said Baxter’s comments were noteworthy, saying that though they didn’t believe the comments would “tangibly impact revenues immediately,” they “indicate that there are heightened risks to advertising revenue at Facebook at this time.”

“These comments echo perspectives we have heard from many of Baxter’s peers in private,” Wieser wrote. “Although a global CEO of a media agency does not dictate client spending decisions … they can influence clients to think differently about their bigger-picture spending choices. To the extent that digital advertising might represent half of many large clients’ budgets and for many Facebook could be half of that figure, public views such as these will at minimum contribute to ongoing scrutiny on Facebook and the search for alternative ways to deploy budgets.”

An executive at Lego Group, which brought on Initiative late last year as its global media agency, commented on Baxter’s advice on LinkedIn by touting the ethics of such a strategy. “Good on you for calling this out Mat,” wrote Ben Campbell, senior global strategist at the Danish toymaker, on LinkedIn. “It starts here—if the rest of the media network makes an ethical stance on this, we are on the cusp of a mighty rebellion. A rebellion based on values and moral compass, not just the pursuit of short-term metrics.” A spokeswoman from Lego did not return a request for further comment.

Clorox, which is not an Initiative client, isn’t looking to pull out of Facebook—yet—says Stacey Grier, vice president of brand engagement, who will become chief marketing officer at of Jan. 7.

“Our perspective is that we can do more good by working through Facebook and helping them and pushing them to address the problems rather than pulling out,” Grier says. “Obviously, that is an option in the long term. But we feel like they are going through some growing pains, and that is not surprising given the trajectory of their growth.”

“I think Mat is right; we should not spend anything with them,” says one media executive who has previously spent money with Facebook. This person suggests that brands who espouse so-called purpose-driven marketing are disingenuous if they continue to support Facebook. “Everyone in the industry has to take a look in the mirror and ask ‘What is the right thing to do?’” says this person, speaking on condition of anonymity. “But all anyone cares about is the dollar.”

Equinox, which advertises on Facebook, said it is being very careful about its dollars when it comes to the social-media platform. “We obviously have the same pause as everyone else does,” says Vimla Black Gupta, chief marketing officer at the New York-based fitness brand. “Everyone is a victim of this; we scrutinize every channel.”