14708: Mickey D’s Hints We Are Unlimited Has A Limited-Time AOR Status. 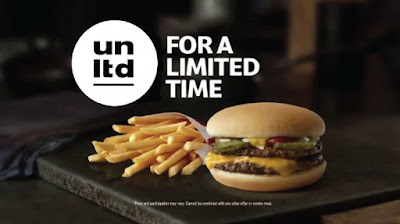 Advertising Age reported We Are Unlimited likely has a limited time remaining on its AOR position with Mickey D’s. This should not be surprising, as the White advertising agency is responsible for the worst Mickey D’s campaigns in the last few decades at least. If the fast feeder launches an account review, look for Wendy Clark to recruit Ted Royer for the pitch. A Mickey D’s spokesperson claimed, “For some time, the McDonald’s U.S. marketing team has been evaluating an agency model that mirrors the significant transformation in the U.S. market.” Of course, that statement does not translate to the McClient looking beyond White advertising agencies for its roster.

DDB’s We Are Unlimited faces new threats on the account

McDonald’s is re-evaluating its agency model, putting more pressure on We Are Unlimited, the agency that Omnicom’s DDB created in 2016 to handle U.S creative for the restaurant chain.

“For some time, the McDonald’s U.S. marketing team has been evaluating an agency model that mirrors the significant transformation in the U.S. market,” a spokesman said in a statement. “An internal process to identify the model that is best for our business and for our customers is underway and nearing completion.”

McDonald’s recently put a significant project out to bid with Wieden & Kennedy New York and TBWA\Chait\Day Los Angeles emerging as finalists, according to multiple people familiar with the matter. McDonald’s has worked globally with TBWA for more than three decades and recently expanded its relationship with TBWA in the U.S., including for work on creative and design assignments, including for McCafe.

If W&K triumphs in this major assignment, it would add a new threat for We Are Unlimited. Still, W&K must navigate potentially thorny conflict concerns since it handles KFC from its Portland office. The chicken chain is a major W&K client and one with which the shop has enjoyed creative freedoms to pump out highly regarded work around the KFC’s Colonel character.

KFC representatives did not return messages asking about conflict issues.

Asked if McDonald’s has selected a winner in the pitch, a spokesman referred back to the company’s statement that the process is “nearing completion.”

We Are Unlimited was formed after a major creative agency review that saw the end of the fast-feeder’s 35-year relationship with Publicis’ Leo Burnett. The creation of the bespoke agency was spearheaded by then-DDB North America CEO Wendy Clark, who has since been promoted to CEO of DDB Worldwide. It was formed under the direction of then-McDonald’s USA Chief Marketing Officer. She left in 2017 and was replaced by Morgan Flatley, who had been chief marketing officer for PepsiCo-owned Gatorade, which has long used TBWA.

We Are Unlimited has seen notable changes of late, with the departure of CCO Toygar Bazarkay earlier this month.

McDonald’s on Friday reported that same-store sales grew 6.5 globally in the second quarter, which according to Bloomberg marks the chain’s biggest sales gain since 2012. U.S. sales shot up 5.7 percent, with the company attributing the rise to “successful national and local deal offerings, including the 2 for $5 Mix and Match deal.”