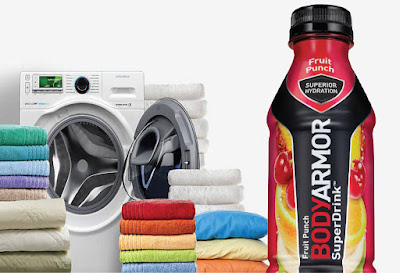 Advertising Age reported Laundry Service was named AOR for the BodyArmor sports drink brand. No word if ex-client John Schnatter made a conference call to congratulate the White advertising agency.

Laundry Service has won creative agency-of-record duties for BodyArmor, a fast-growing sports drink brand that has been mounting a challenge to PepsiCo’s Gatorade. The agency, which won the account after a competitive review, will handle TV, digital, social and out-of-home with its first work expected in 2020. The selection marks the first time BodyArmor has used an AOR, according to a Laundry Service spokeswoman.

BodyArmor has marketed itself as a healthier alternative to Gatorade. Ads have featured pro athletes who are also investors, including Kobe Bryant, who has directed some of the brand’s recent ads. Coca-Cola Co. took an ownership stake in the brand last year. Endorsers include U.S. soccer star Megan Rapinoe, who appears in a new ad that debuted during the World Cup.

BodyArmor has also run ads using the tagline, “Thanks Gatorade, we’ll take it from here.”