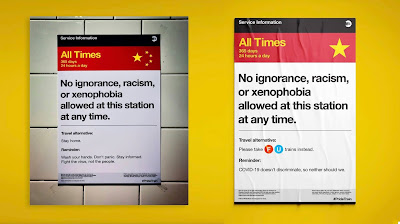 Adweek reported on the Pride Train campaign designed to combat anti-Asian hate and racism, which has spiked during the COVID-19 crisis. Gee, guess the Ad Council’s #AloneTogether propaganda isn’t working…

Campaign launched at the height of coronavirus-fueled xenophobia

Two weeks ago, when people still left their homes and New Yorkers took the subway to work, Thomas Shim and Evan Choi snuck from station to station pasting up posters. With the Metropolitan Transit Authority (MTA) logo stamped in the upper right corner and the familiar phrase “Service Information” emblazoned across the top, the posters looked like official public notices from the city agency that operates one of the world’s most busiest commuter systems.

Featuring colors from the Chinese, Korean and Japanese flags, the official-looking announcements tell riders: “No ignorance, racism, or xenophobia allowed at this station at any time.”

But the posters weren’t officially sanctioned by the MTA. Instead, they are the latest guerrilla campaign by Pride Train, the same group that brought attention to LGBTQ Pride Month and racist attacks at subway stations is now tackling xenophobia related to the coronavirus.

Shim, one of the founders of Pride Train and a creative strategist at Instagram, told Adweek the inspiration for the latest posters came from the rise in anti-Asian attacks since the coronavirus pandemicstarted.

“As an Asian American, I’m hyper-aware of my surroundings, and I’ve felt watched,” said Shim, who has Korean and Japanese ancestry. “And it doesn’t help that some of my friends and neighbors have been yelled and spat at.”

Public attacks on Asian Americans and Asian immigrants began to ramp up in February, with reports of violence around the U.S. as well as internationally. One viral video showed a Chinese woman wearing a paper medical mask being chased, holding her arms up to block her face as a man threw things at her, and finally being violently grabbed and hit.

Less violent—but still impactful—forms of discrimination took hold quickly as the virus spread, with Asian American restaurants becoming deserted to the point where food bloggers started a #SupportChinatown campaign in an attempt to keep businesses open.

Choi, who is Korean and works as a freelance art director, said he’s experienced harassment mostly at later hours when subways and public areas are more deserted. “When I go outside around 9 or 10 [at night] when there are fewer people around, people have said things to me like, ‘Get out of the country,’” he said.

“Since Thomas and I started this project, I hear a lot from my Korean friends who say, ‘Thank you for doing this; I’m really afraid to go out and get harassed,’” Choi said. “Right now is the highest point of it. There’s a lot of misconceptions like, ‘Asians are the virus.’”

On Pride Train’s Twitter account, a photo of the recent posters was met with harsh responses that served as examples of why the campaign is needed. “The left are so ignorant they believe a virus is a race,” said one reply, seemingly clueless about the spate of violent attacks the campaign is trying to halt.

The majority of responses to the campaign have been positive, but Shim said he was surprised that some of the strongest negative feedback came from Asian and Asian American people on social media.

“The Chinese flag has a very heavy stigma attached to it,” said Shim. “A lot of our Vietnamese and Hong Kong followers found it to have [negative] connotations. We tried to see it as a national flag rather than a party flag, but obviously, people are reading into it.” Shim said that Pride Train understands why the Chinese flag—which is also the flag of the country’s communist party—is upsetting for many people.

The response has been a learning curve for the small group of creatives that are already accustomed to a certain amount of bigoted feedback.

“Just like I can’t fully understand what a trans person goes through day-to-day, I can’t understand what a Vietnamese person sees,” Shim said. “As we’re aiming for radical inclusivity, we are asking how to do it better.”