14954: Is The 3% Movement Hijacking The Civil Rights Movement? 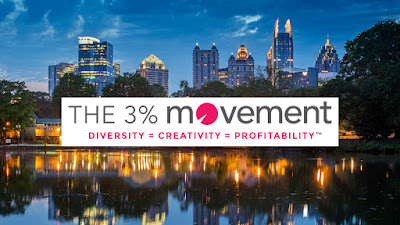 Adweek reported Kat Gordon is driving her White women’s bandwagon to the corner of intersectionality in Atlanta. Sorry, but Gordon’s understanding of intersectionality and women of color is, well, less than 3%. And it figures that the 3% Movement’s ride toward true diversity will likely be postponed—and sent into reverse—by COVID-19. Perfect.

The organization makes its way south for the first time

Since its inception nine years ago, the 3% Movement has helped inspire waves of inclusive change across the advertising industry. With a pay equity pledge program, an in-depth agency certification for gender parity and conferences that bring diversity discussions to a massive stage, 3% is changing the game by leveling the playing field.

Founder Kat Gordon told Adweek that after 25 events around the globe, advertising’s most visible gender equality organization is pulling back from its frequent mini-conferences. Instead, the 3% Movement will have one major annual gathering in addition to its “seasonless” work consulting with the industry.

In 2020, the conference will move to Atlanta, bringing its impact to a black-majority Southern city for the first time. The move reflects Atlanta’s growth as an advertising hub and the 3% Movement’s commitment to approaching gender equality through a diverse lens. The city has one of the most visible LGBTQ populations in the country in addition to being a black culture mecca.

“It’s very much a crusade. And the people who come become foot soldiers in the crusade, so we want it to be truly intersectional,” Gordon told Adweek. “We don’t just want women here, and we don’t just want white people here. We want a true representation of the industry, and we want more male attendees as well.”

Gordon launched the 3% Movement after learning that only 3% of creative directors were women, a number that has since gone up to 29% (with Gordon’s work playing no small part.) But she wants to see an industry where women make up at least half of creative directors and where people of color are not only in higher roles but want to stay in those roles.

Focusing on gender parity in advertising means recognizing that some groups of women have unique needs and challenges. That’s why the 3% Movement commissioned the Parenting in Adland report to find out why mothers were under-indexing in the industry. And at the 2019 conference, 3% surveyed attendees to gather demographics. While the majority of attendees self-identified as white females ages 31-50 in senior leadership positions, 39% of people at the conference said their race or ethnicity was black, Latino or other non-white groups. In addition, men made up 21% of attendees, and a few attendees identified themselves as transgender or non-binary. The survey did not include a question about sexual orientation.

“Women aren’t a monolithic group,” Gordon said. “There are groups of women who need extra muscle from 3% applied to make sure they’re heard and celebrated and discoverable for hiring.”

As one of the major advertising hubs in the South, along with Miami, Atlanta agencies struggle with the same diversity and inclusion issues as any agency in New York or Los Angeles. Celeste Hubbard, executive vice president at full-service agency Chemistry, moved to Atlanta four years ago after a stint at 72andSunny’s L.A. office. Hubbard said that while Atlanta is a black-majority city, staffing at agencies has far to go to match the city’s resident makeup, something she believes the agencies are taking into account and working on.

“I think agencies are putting in that effort to recruit, identify and retain talent that comes from multicultural or minority backgrounds,” said Hubbard, noting that Atlanta is more than just home to massive corporate clients like Coca-Cola and Home Depot. It is also home to a groundswell of talent in music, film and television and influencer spaces.

Hubbard said that while agencies are still working on adding and retaining staff of color in Atlanta, it’s common to see agencies there working with “local entrepreneurial production and video content development companies that are often led by African-American young people that are making digestible content for the local digital platforms.”

Atlanta native Shannon Watkins, senior vice president of brand and creative services at Aflac, said that the city’s diversity and its stance as a sort of an outsider to traditional Madison Avenue advertising drive more creativity.

“Women and minorities in creative fields can thrive in Atlanta because the city itself is a creative community that is open to unique points of view,” said Watkins. “As a result, advertisers and marketers can focus on delivering breakthrough work without fear or judgment. And when that happens, creative ideas are delivered in their purest form and have the highest likelihood of breaking through in the marketplace.”

Atlanta is already a hub for women leaders in advertising who consistently push the industry to diversify. The city is home to executives like Ronnie Dickerson-Stewart, chief diversity officer for Publicis Groupe and former diversity and inclusion leader at Digitas, who was given the Nancy Hill award at 3%’s 2019 conference. The city is further drawing talent away from Silicon Valley with the recent move of Kimberly Easley from Facebook to Dentsu Aegis, where she now leads creative and executive talent recruiting.

And in Atlanta, you’ll find agencies like Moxie, which is easily identified as one of the most diverse offices on multiple levels, and women-founded companies like WeAreRosie.

While Atlanta is modeling the 3% mission, it’s not perfect. Hubbard said that women in Atlanta advertising too often work underneath the same glass ceiling that hampers women in other markets.

“When I’m attending client meetings or even when I’m in internal meetings within my own agency, oftentimes, the majority of the participants in the room are women,” Hubbard said. “Women are leading these projects and executing these massive deals and assignments, but then when you look at the vps and executives and higher, you’re not seeing that representation at the same percentage. It’s a complete flip.”