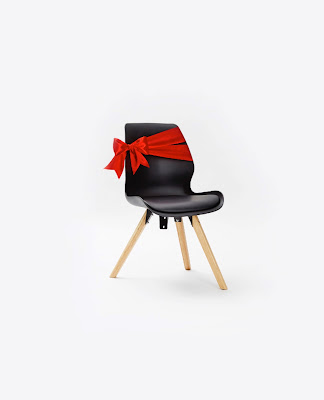 Saatchi & Saatchi Denmark is responsible for this divertisement hyping gender equality. Um, is Saatchi & Saatchi really qualified to pontificate on the subject? Really? The long-winded and air-headed concept explanation below requires sitting down. 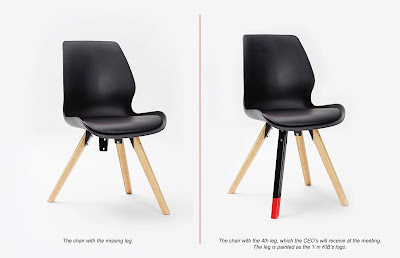 “We’ve created the campaign for KiB (Women On Boards) — an organization fighting to give women more influence at the top of Danish businesses. Up until now it has been a struggle for KiB to create the needed impact, mainly because a great deal of Danish companies have not been interested in a dialogue as to the benefits of having more women in top positions. So, we had to come up with an extra ordinary campaign to break the wall of silence”, says Annette Piilgaard, CEO of Saatchi & Saatchi Denmark.

“We knew we had to come up with something mind provoking and at the same time very easy to decode. And what would do the job better than sending the companies a brand-new modern chair ... with a missing leg to tell the story about the imbalance? The link from the three-legged chair to the need for more women in leadership positions and boardrooms is a very clear and concrete symbol that creates great impact”, explains Sabine Herskind, Creative Director of Saatchi & Saatchi Denmark.

“The strategy was to put pressure on the companies receiving the chair with the missing leg — a leg we would bring to a meeting if they invited us for dialogue. So, we decided to go public with the names of the companies we approached. It has been provoking, but highly effective”, says Annette Piilgaard.

The campaign was launched in the beginning of January created instantly created a very broad and positive reaction. Besides securing meetings with leading companies, it has also generated a long range of articles in the Danish press supporting the campaign. In addition, the Danish Ministry of Industry, Business and Financial Affairs have also reached out to initiate a dialogue.

“We could not have wished for a better reaction and it feels great to have generated the reach we were aiming for. At this point, 7 out of 10 have invited us to a meeting and we are extremely happy for the positive feedback. But what matters the most is the end result; more women in leading positions in Danish top companies”, says Gitte Maya Elsing, chairwoman of KiB.