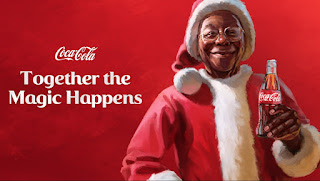 Since the 1920s, Coca-Cola has depicted Santa Claus in its advertising. In 1931, the soft drink company presented an image (depicted below) that has been almost universally embraced as the prototypical Santa. Now in 2020, McCann in Brazil spotlighted a Black Santa (depicted above) for the brand. In short, it took roughly 100 years for Coke to recognize Black people. Merry Fucking Christmas.