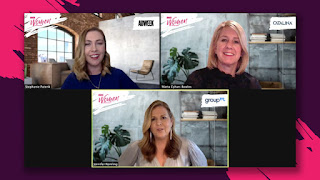 Adweek published a fluff piece on the alleged challenges faced by women in the advertising and marketing field. Based on the photograph illustrating the story, the Women Trailblazers Summit featured White women. In other words, the co-conspirators who have perpetuated—along with White men perpetrators—the discriminatory exclusivity in Adland continue to cry victimhood themselves. Black women, on the other hand, are waaaaay more underrepresented, except in roles like receptionist, janitorial services and Chief Diversity Officer.

Women Are Stuck in Mid-Level Roles. Here’s How Corporate America Can Support Them

The pandemic has reshaped work in their favor, but there's more to be done

After months of Covid-related challenges at work and home, one in four women is thinking about downshifting her career or leaving the workforce entirely. That’s according to a recent study on women in the workplace from the nonprofit advocacy group LeanIn.org and consulting firm McKinsey.

As a result, the report advised corporate America to ask itself whether cementing a more flexible and equitable work environment is worth it to retain and champion women.

At Adweek’s Women Trailblazers summit this week, executive editor Stephanie Paterik sat down with two marketing leaders to discuss how this issue impacts women in their industry in particular, as well as how women can advance beyond mid-level positions—and how the pandemic will impact how women work moving forward.

At a time when marketing jobs increasingly require expertise in data and technology, fewer women are graduating in related fields, making it even harder for women to become leaders in the space, said Marta Cyhan-Bowles, chief marketing officer of media company Catalina.

Part of the problem is the tech industry remains dominated by men such as Facebook CEO Mark Zuckerberg and Twitter CEO Jack Dorsey. “I think that in some ways women don’t see … [the tech industry] could be a profession that can be for them,” she added.

However, Jennifer Remling, global chief people officer at media investment company GroupM, noted a bright spot in that media and advertising is a good place for women to start their careers and get on-the-job exposure to data and technology even if their backgrounds aren’t specifically in STEM.

“We’re hiring people from media and advertising backgrounds, but we’ve become much more tech-focused and that’s just going to continue to increase,” she said. “So I think it’s a good place to come in … and see where you can play a role in it because … women can see themselves in it more so than maybe an engineering or a tech company.”

And, as coding becomes integrated into primary education, younger generations—female and male—will be better prepared for careers in tech-enabled marketing.

“But in some ways, there’s a huge gap over the next 10 years [where] we need to create that focus so that we have people to fill the jobs,” Cyhan-Bowles added.

Finding an ally in the office

For women already in the field—or just starting out—finding a way to work with company leaders is one way to proactively create paths to growth, Cyhan-Bowles said.

Doing just that enabled her to be more “provocative or adventurous, or try different things or bring innovation forward” in her own career, she added.

Then, as women grow in the workplace, it’s about building relationships and “making sure your team is following you and management buys what you’re into,” Cyhan-Bowles said. “Because in meetings, sometimes you need somebody who’s going to support your point of view and really endorse that versus [being] the lone wolf creating and trying to voice change.”

Managers, on the other hand, should focus on career advocacy—and companies should formalize their advocacy programs.

“What’s happened historically is there’s all these informal networks, and most of them are men because [they’re] in most of those senior roles. And they go off together or they go to the bar or what have you, and a lot of the women and underrepresented groups are left out of that more natural organic relationship that happens where you build trust and bonds,” Remling said.

That’s why GroupM has a formal career advocacy program that partners women and other underrepresented groups with company leaders who “can really help move their career forward.”

“[That person] gets to know them and can advocate for them on their behalf in rooms, plug them into experiences and opportunities that are going to help advance their career and help them develop further,” she said. “Because I think if you don’t have that, you end up with more of the same [instead] of disrupting that power network.”

Cyhan-Bowles agreed that advocacy programs like this can help advance more women from mid-level jobs to leadership positions and succeed where previous diversity and inclusion initiatives have failed.

Remling pointed to the director level in particular as an area of focus for corporate America “to help get women up through the ranks.”

The future of work

All this comes at a moment when many working moms are suddenly responsible for child care and homeschooling. “I’m hearing that a lot of them feel like they’re at the breaking point because they’re trying to figure out how to manage all that’s in front of them,” Remling said.

To prevent these women from simply opting out of the workforce, employers need to think about how they can support their female staff—and even rethink how women work in particular, “especially because they’ve carried the burden for so long for childcare,” she added.

“I think there’s a moment in time where we can … figure out how to make it better going forward as we come out of this.”

At GroupM, that means determining how employees who don’t necessarily want to go back to the office can continue to work remotely after the pandemic is over.

“We’ve proven that it works. [GroupM] literally overnight had 35,000 people who were working from home around the world and miraculously it worked,” Remling said. “I think people now believe that you can be very productive, and maybe even more productive, [at home]. So we’ve got to figure out how to build on that and keep that momentum for the people who want to do it.”