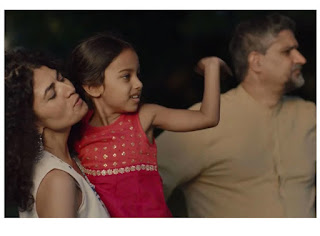 On a related note, the advertising agency that produced the campaign “won” the assignment because its founder is a member of the Ad Council board of directors—a classic case of cronyism to further demonstrate the blatant hypocrisy embedded in the campaign and the Ad Council.

Everyone, at some point in their life, will grapple with feelings of isolation or alienation as an outsider or misfit. In its latest campaign from creative agency Pereira O’Dell, The Ad Council challenges viewers to remember a moment when they felt that way, remember how it hurt to be left out, and walk a mile in someone else’s shoes who may experience those feelings for far longer than just a moment.

The campaign, “Belonging Begins With Us,” recognizes that the most vulnerable people to constant feelings of isolation and alienation are immigrants, and urges Americans to create a “more welcoming nation” by showing some empathy. A debut 75-second PSA—set to the tune of a cover of “Walk a Mile in My Shoes” from Boston band Lake Street Dive—exposes viewers to the pervasive, questioning side-glances or blatant stares underrepresented people, especially those who are not born in this country, receive frequently from those in “the majority.”

The Ad Council says the problem requires a fairly simple solution: Be a little warmer and more accepting. “‘Belonging Begins With Us’ reminds us that we all have the power to make others feel safe and welcome in our communities,” says Ad Council President-CEO Lisa Sherman.

“Just a smile can have a huge impact on people’s lives,” adds PJ Pereira, founder and creative chairman of Pereira O’Dell and an Ad Council board member. “It’s not that it will solve all the world’s problems but that simple act can have a big impact.”

The campaign was developed jointly by the Ad Council, American Immigration Council and Welcoming America, with financial support from the Carnegie Corp., the Chan Zuckerberg Initiative, Einhorn Collaborative, Ford Foundation and Stand Together. It comes at a pivotal time in American history when a rising tide of protests against social injustice has driven people to confront their own biases and work toward creating a more-inclusive society for everyone.

Michelle Hillman, chief campaign development officer for The Ad Council, says the campaign has been two years in the making. She says it draws on extensive research that showed everyone has a story to tell, and there are more people than not in the U.S. who are “tired of the divisiveness” in the country and want to help make it more inclusive. Hillman asserts that this is a “human issue,” not a partisan one.

“You ask about the times we live in, the microaggressions [that are being confronted],” Hillman says. “We’d love to think about this campaign as an antidote to that, to help people feel like they belong.”

The PSA directs viewers to a microsite where The Ad Council is featuring stories from people on the subject of belonging. The PSAs will run nationwide across TV, radio, digital, print and out-of-home placements. Facebook, Google, YouTube and Walmart Media Group are among the platforms that have donated media placements to the campaign. Full-service agency Engine also donated strategy and outreach services.

Pereira says he remembers traveling to New York in 2018 for an Ad Council meeting, “in a distant time when we still traveled.” According to Pereira, the Ad Council announced that its latest project would be on this sense of belonging in America, and he immediately turned around to Hillman, requesting to work on it.

See, for Pereira, an immigrant from Brazil, the issue is personal. In a 2013 op-ed he penned for Ad Age, Pereira urged the U.S. ad industry to speak up on behalf of immigrants and asked what would it be “without people like Linus Karlsson, Nick Law, David Droga, Rei Inamoto or Jose Molla?”

“It’s a very complicated issue,” Pereira says. “It’s so politically charged but I want to be on the human side of this. This is nonpartisan.”

He says the inspiration for the creative came from the scene in “Forrest Gump” where a young Forrest is having trouble finding someone who will let him sit next to them on the school bus (of course, before the love of his life, Jenny, invites him to pop a squat next to her).

While it’s a fictional movie, Pereira says that scene was very real to him and he experiences something similar “every time I go to a new place with my family. We see it. We see people looking at us thinking ‘you’re not one of us.’ That is a reality we immigrants recognize, but everyone can feel a little bit of that,” he explains.

“It’s definitely opened up a dialogue for us that we normally wouldn’t have had,” Nymark says, noting how many people with different backgrounds avoid talking about their experiences. “This campaign and the emotions it tapped cracked the dialogue wide open for us.”

Gonzalez says she saw herself in the woman in the final scene, carrying her daughter as a white family casts wary glances their way. The scene particularly resonated with her as both a child to Palestinian immigrants and now a mother to a daughter herself. “As people see it, I really want them to see themselves in it,” she says.