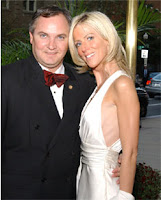 The Reality of Stereotyping
Why it’s OK to hate celebrity wannabes. Just don’t pigeonhole them.

I feel sorry for the Salahis, the White House gate-crashers. I can’t help it. Can you imagine being internationally renowned as social-climbing, empty-headed almost-reality-TV stars with too much spending power but not enough taste or self-awareness to resist breaking into a state dinner? But I can’t defend them. They just seem too awful. Michaele Salahi is an ambassador to the Commonwealth of Virginia’s wine and tourism industry. Seriously,it says so on her Facebook page. And while it’s hilarious that such a post even exists (Virginia is like the 37th state I would think of in connection with wine), it’s just sad that she feels the need to brag about it. And if Mr. Salahi wants to be even a percentage point believable as the director of America’s Polo Cup, he should at least ape the physique of the rider, not the horse. Sure, the world is full of pretenders. (As Maureen Dowd wrote in her New York Times column on the same subject: “The mock has run amok.”) But the Salahis represent with crystalline brilliance what Jon Stewart calls “fame-whore a--holes who crave attention.” And who the heck wants to be that poster child?

OK, I’m being kind of mean. I don’t know the Salahis at all. Some of my bile comes from what I’ve read on blogs and in gossip columns, but I’m really just making sweeping judgments about their ilk: reality-TV strivers. Although I constantly rail against the dangers of stereotyping on the basis of race and gender, I cannot resist lumping the Salahis in with the likes of Jon and Kate or the hordes of wannabes who audition for the Real Housewives shows. Yes, I know there’s nothing to stop me from applying the same logic—as it is with a few, so it is for all—to shape my opinions about Asian folks or the blind. But if stereotyping is so wrong, why can’t I stop doing it?

Usually, this is the paragraph where I parse the available facts and beg you to give the Salahis the compassion and sympathy we should always afford individuals. But because I hate the Real Housewives of Orange County, New York, New Jersey, and Atlanta—all of them—I cannot to come to Salahi’s defense. If their formal invitation to the state dinner turned up tomorrow, I would still dislike the Salahis because even with an invite, they are still too tacky and low rent for words. And I know I’m not alone. Check out the comments on Michaele’s Facebook page. But if the Salahis were black, we (most of us anyway) would hesitate before hurling stereotypical insults their way. That’s because we’ve been trained, at least in the media, to think twice before calling African-Americans names (think Imus). Michaele and Tareq have the misfortune of fitting a type—like WASPs and the religious right—that it’s OK to despise and make fun of in public. And, even if I can’t stick up for the Salahis, I have to cry foul on that kind of behavior, starting with myself.

We don’t stereotype just to be mean. In fact, we probably couldn’t get through a day without it. As John Dovidio, a psychology professor at Yale recently told me, we do it as a way of making sense of our surroundings. “Stereotyping allows us to understand a complex world with a minimum of effort and as quickly as possible,” he says. “Most of the time we develop rules of understanding the world that work, but because it’s a simplifying system that trades efficiency for accuracy, it can become distorted and biased in a self-perpetuating way.” We assign characteristics to groups and decide who belongs and who doesn’t based on inaccurate summations such as “Black people commit all the crime,” “All women are desperate to get married,” “Men are dogs,” “Blonde women dressed in saris and married to men with vaguely foreign-sounding names were probably invited to the state dinner for the prime minister of India even though they don’t have an invitation.” Which works great until it’s your turn to get offended.

The sad fact is, each of us is just one viral video or e-mail or 911 call from becoming the butt of a national joke. We all fit a type to some degree, whether it’s the loud mean black woman who shoves you out of the way to get on the subway before you or the painfully pretentious 20-something white guy hogging the best table at the coffee shop because he’s working on his novel. But if we’re asking the Secret Service and other public servants, such as police officers and baggage screeners, to overcome stereotyping (also known as racial profiling), then all of us have to try, too. Which means we have to fall out of love with pigeonholing. Even if reality TV promotes name calling and broad, usually negative, stereotypes. TLC is creating a new reality show titled One Big Family, about a morbidly obese family and their struggle to live in a skinny world. Do you think people will watch that to understand what it feels like to be overweight in America or to laugh and point fingers? Even if the “big” family did participate voluntarily, the cable channels deserve blame for encouraging these kinds of people. Or maybe we should blame ourselves, sitting at home boosting the ratings.
Posted by HighJive at 1:48 AM