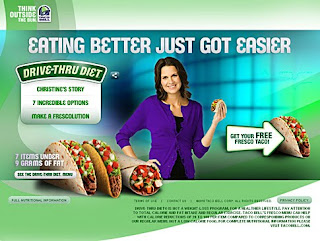 The New York Daily News reported on the latest gimmick from Taco Bell—a spokeswoman who claims to have lost weight while eating at the fast food joint. Pretty contradictory for a place that introduced The Fourth Meal.

Move over Jared, there’s a new fast-food weight-loss icon in the making.

The Mexican fast-food chain is serving up a healthier menu items and now a healthy spokesperson, like Subway’s Jared Fogle, who helped rake in billions of dollars over the last decade for the chain, reports ABC News.

Fogle’s now-famous before and after weight-loss commercials (he lost over 245 pounds) made him a household name and rebranded the sandwich joint as a healthy alternative to burgers and fries.

But with nearly one-third of the population obese, experts are having a hard time swallowing the idea that fast food is really an answer to living a healthier lifestyle, according to ABCNews.com.

“What I like is the availability of fast food items that are improved,” Dr. David Katz, director of Medical Studies in Public Health at Yale University told ABCNews.com.

In a short statement on drivethrudiet.com, Christine attributes her weight loss, which happened over two years, to “choosing Fresco items … and making other sensible choices.”

“These results aren’t typical,” she adds, “but for me they were fantastic!”
Posted by HighJive at 9:13 AM