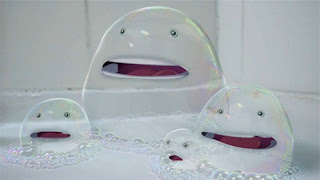 Read the Advertising Age editorial below, followed by a MultiCultClassics perspective.

While the words in this space are usually directed at marketers, we’d like to take an opportunity to talk to all of those out there who often find themselves so offended by ads that they feel a need to launch a crusade. To you we say: “Take a deep breath. Have some perspective.”

The latest March of the Offense Brigade was set into action by Method’s “Shiny Suds” spot. A clear spoof on the old “Scrubbing Bubbles” spot, it shows a woman entering her shower only to find some creepy, leering talking bubbles that have no intention of going away. Many of our readers viewed the spot. Many loved it. Little did they know that while they were getting the warm fuzzies laughing at a clever spot and considering taking civic action for better laws to disclose chemicals in household cleaners, they were actually condoning rape.

Marketers are often chastised for being too conservative, for not taking risks in their advertising. But sometimes, it’s easy to see their point. Especially in an age when a blog post and 300 commenters can derail a campaign, maybe it makes sense to play it safe. A spot might upset the homophobic. It might upset men’s rights groups. Conversely, it might run afoul of gay-rights activists or ardent feminists. And God forbid a marketer crosses mommy bloggers.

Of course, there is the occasional marketing effort that is hopelessly clueless and offensive. Marketers, too, have to pay attention to such complaints, no matter how small. They don’t always need to react, but they do need to listen.

In this case, Method was probably right to just pull the spot. After all, rape and sexism aren’t, like gay marriage and sex on TV, issues that can be argued. And a feel-good brand such as Method probably has a large number of consumers who could get, shall we say, overly passionate about such a spot.

Maybe it’s not so easy to let such perceived slights go. But perhaps if you’re the sort to start letter-writing campaigns and the kind who’s quick with a #fail hashtag on Twitter, you could try to stop spotting offense under every rock. They’re just commercials, after all. You can always change the channel.

There’s something inherently ignorant about this editorial. For those who missed it, first check out the viral video at YouTube.

MultiCultClassics has consistently argued that no one can decide if someone should or should not be offended by something—even in instances where we didn’t personally believe something was offensive. To dismiss the offended ultimately displays insensitivity and arrogance of the highest order.

This video actually plays like a Saturday Night Live commercial parody—or a poor man’s version of one. The frat boy humor is heavy throughout.

And that’s the problem.

For starters, it seems safe to guess that women are the intended targets for the advertiser, as moms make most of the purchase decisions on household cleaning products. So why would Method and Droga5 believe it’s cool to portray a naked young woman being ogled and sexually harassed by dirty bubbles? Um, because Method and Droga5 are comprised of frat boys…?

This remains an issue that our industry refuses to face. That is, practitioners continue to create communications through their personal viewpoints versus the audience’s viewpoint. If Method and Droga5 think it’s funny, the rest of society should respond with raucous guffaws. And if anyone takes offense, fuck you.

For Ad Age to defend the mess by declaring many of their readers loved the spot only demonstrates the publication’s stupidity. Hey, Ad Age editors, you know the industry is culturally clueless, as you continue to report on the lack of diversity. Doesn’t that lead to the possibility that your readers are culturally clueless too?

It’s also really dumb for Ad Age to write, “They’re just commercials, after all. You can always change the channel.” No, people can choose to change the channel when they’re insulted by the network or programming. Commercials are uninvited annoyances that invade our personal space. Viral videos are slightly different, as viewers are enticed to look. But that only makes matters more obscene, especially if your video is patently asinine or offensive.

Method is lucky to simply remove its inappropriate message from the Web. God forbid the people offended by the video might take a closer look at the culturally clueless advertising executives responsible for its existence. They might discover an industry where disrespect and discrimination toward women and minorities are the norm.
Posted by HighJive at 8:42 PM

Who wrote the editorial?
What happen to the by line?

Ad Age does not usually sign editorials. But it feels like something from Jonah Bloom or Rance Crain. Or perhaps one of the folks from Creativity, as they are quick to bow before anything produced by Droga5.