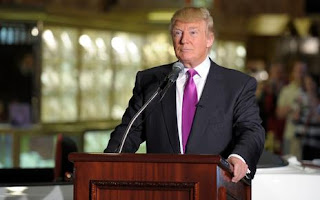 Trump Announces His Candidacy, Friendship with ‘The Blacks’

Is there a phrase more exciting to the politics junkie than “Newsmax Exclusive”? That’s the means by which the latest bit of Donald Trump news comes to us. The reality TV star and avowed birther has told Newsmax that on the May 15 episode of The Celebrity Apprentice, he’ll be announcing a press conference to be held a few days later. And at that press conference, says Trump, he’ll officially declare his intentions to run for president in 2012.

It makes sense that Trump would leak this bit of information to Newsmax, a right-leaning outlet based in West Palm Beach, since they’re clearly in Trump’s corner (and since it’s not the first time this year they’ve breathlessly run a piece about his White House ambitions). The latest item, by Ronald Kessler, goes to great lengths to defend the Donald against haters. “Many will snicker that it’s all a publicity stunt,” writes Kessler. “But that defies the facts and common sense. Of all the people on the planet, Donald Trump is the last person who needs more publicity.” It’s true; celebrities generally like to fade into gentle anonymity as soon as a reasonable amount of people know who they are.

Trump probably needs all the allies he can get right now, since establishment GOP candidates don’t seem thrilled with him and he’s admitted he may have to run as an independent. But at least he can count on the black vote! Despite recent speculation that all of Trump’s birther talk might be alienating people of color, he confidently declared in an interview this morning: “I have a great relationship with the blacks, I’ve always had a great relationship with the blacks.” And there’s no quicker way to earn the goodwill of the black community than by referring to them as “the blacks.”
Posted by HighJive at 11:05 AM