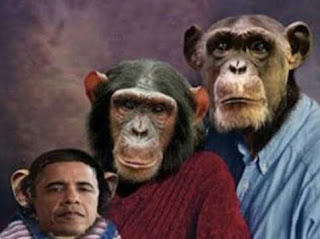 A California Republican party official who sent out an e-mail of President Obama’s face super-imposed onto a chimp says she’s sorry, but insists she wasn’t trying to be racist.

Marilyn Davenport, an elected member of the Orange County Republican central committee, sent the e-mail on Friday. The “family photo” features the commander-in-chief as a baby chimpanzee with two chimp parents.

Along with the offensive image was the tagline “Now you know why—No birth certificate.”

The supposed gag refers to the belief by so-called “birthers,” who insist—even after the White House released a digitally scanned image of his Hawaii birth certificate in 2008—that Obama wasn’t born in the U.S. and is ineligible to be president.

Davenport admitted to passing it around to her “friends and acquaintances,” reported the Orange County Weekly.

The Tea Party activist then offered up a half-hearted apology.

“I’m sorry if my email offended anyone,” she wrote, according to the OC Weekly. “I simply found it amusing regarding the character of Obama and all the questions surrounding his origin of birth.”

Davenport wrote she hadn’t considered that Obama is “half black.”

“In fact, the thought never entered my mind until one or two other people tried to make this about race,” she wrote.

The GOP committeewoman then blamed the “media” for trying to make a big deal out of the racist e-mail, insisting that the “average person knows and agrees is much ado about nothing.”

Davenport has since sought to hunt down the “cowardly” person who leaked the e-mail, said Republican Party of Orange County chairman Scott Baugh, who was one of the original people who received the “highly inappropriate” Obama e-mail.

“It’s a despicable message, it drips with racism and I think she should step down from the committee,” he said.

Davenport, however, has already refused to quit.

“I will NOT resign my central committee position over this matter,” she wrote to the OC Weekly.

“I have never seen anything like this before from an elected official,” Michael Schroeder, former chairman of the California GOP Party, told CBS 2 News in Los Angeles. “It’s stunning.”

He noted that in 2009 the former Republican mayor of Los Alamitos, Dean Grose, e-mailed a photo showing a watermelon patch in front of the White House last year, Davenport defended him. She also backed former Newport Beach City Councilman Dick Nichols for making an offensive remark about Mexicans.

“She has managed to top both of those incidents by comparing African Americans to monkeys,” Schroeder told the OC Weekly on Saturday. “She has disgraced herself and needs to resign.”

With News Wire Services
Posted by HighJive at 2:00 PM