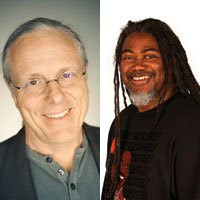 The One Club posted the following announcement on its website:

Where Are All The Black People?

A frank, no-holds-barred conversation about diversity--and the dearth of people of color--in the advertising industry, and what we’re doing to change it.

Okey-doke, where to begin?

First, The One Club asking, “Where Are All The Black People?” is like the Minuteman Project wondering, “Where Are All The Mexicans?” That is, the organization as a whole doesn’t really care about locating any non-Whites, as evidenced by the abysmal lack of color in its roster of honorees. The One Club has traditionally been an exclusive club, despite the recent clichéd moves to delegate diversity and launch minority youth outreach programs.

Second, the event appears to be part of The One Club’s Creative Week being held May 9-15 in New York. In fact, the schedule of activities indicates “Where Are All The Black People?” is dovetailing with The One Show Student Award ceremony. Guess which affair will probably draw a bigger crowd.

Third, it should be interesting to hear Jeff Goodby weigh in. The man has been noticeably silent on the topic. If he parrots his powerhouse peers, expect Goodby to deliver one of these lines:

“Our industry has to do a better job.”
“We have a long way to go.”
“My agency is starting a minority internship program.”
“Afro-Americans aren’t aware of the opportunities.”
“Let’s assemble a Diversity Committee.”
“I’m pledging $$$ to UNCF.”
“Some of my best friends are ADCOLOR® Award winners.”
“I’m just an Old White Guy.”
“Now that’s fucked up!”

Fifth, the discrimination dearth of minorities can only be addressed by asking, “Where Are All The White People?” That is, until there is bona fide commitment and active involvement from the current majority, nothing will change.

Ironically, if the event does turn out to be a transformational experience, it might qualify for a White Pencil.
Posted by HighJive at 12:06 AM

Email ThisBlogThis!Share to TwitterShare to FacebookShare to Pinterest
Labels: diversity in advertising, exclusivity, goodby silverstein and partners, old white guys, the one club


What panel that would be.