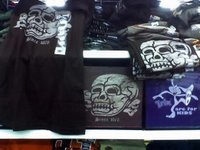 Shirt happens in a MultiCultClassics Monologue…

• Wal-Mart continues to take heat for selling t-shirts with Nazi symbols (depicted above). The mega-retailer agreed to remove the items from stores months ago, but they’ve struggled to get it done. “Everyone agreed that these shirts have to go, including Wal-Mart; it’s just that they didn’t do anything about it,” said Rep. Jan Schakowsky (D-IL). “Either at the time they really weren’t serious, or their capacity to do that is limited, which makes one wonder about recalls of potentially dangerous products.” Wal-Mart replied, “We’re working as quickly as we can to get them off [store shelves] … We expect to reach 100 percent completion of this task in a few days.” So much for thinking Wal-Mart operated with Nazi-like efficiency.

• 50 Cent won’t pay a cent for canceling a concert. A concert promoter sought to sue Fiddy for damages after the rapper failed to show for a show, but a judge ruled against it. Fiddy had “promptly refunded” a $50,000 deposit after the cancellation. So if the promoter hoped to get rich, he’ll die tryin’ at this point.

• Rapper Jadakiss was indicted for gun and drug charges stemming from an October arrest in Yonkers, New York. Police allegedly found a gun after stopping the artist’s car and detecting marijuana. “I have yet to see or hear of any evidence connecting my client to possessing this weapon,” said the rapper’s lawyer. Gee, isn’t it just a given?

• Immigration has inspired recruitment efforts for the Ku Klux Klan. “They use this immigration issue to bring in others who feel like America is under siege,” said the Anti-Defamation League’s national civil rights director. “It’s easy for hate to spread.” An email from a KKK leader stated, “Everyday that our government allows this Illegal Mexican Invasion to continue, our membership numbers continue to grow in the KKK.” Wow, the KKK is starting to get more diverse in directing their hate.
Posted by HighJive at 12:05 PM

A Wal-Mart spokesman went on to say "But the damn things sell so well, it's hard to remove them. I guess we will if we have to."