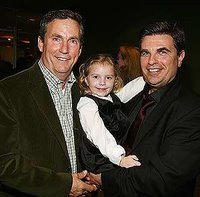 Talking and trashing in a MultiCultClassics Monologue…

• The mayor of North Miami (pictured above, left) has invited NBA gay-basher Tim Hardaway to spend the day with him. “We’re just trying to show him that there are living, breathing people that just happen to be gay,” said North Miami Mayor Kevin Burns, who is gay. “I don’t expect [Hardaway] to be waving a peace flag anytime soon, even after this. … But maybe he’ll be less likely to say something bad about people if he knows them and understands a little more.” Hardaway will probably open by saying, “Hello Gayor Burns — I mean, Mayor Burns.”

• Foxy Brown’s anger-management studies apparently failed, as the rapper was busted for assaulting a Florida beauty shop owner. Brown allegedly threw hair glue and spat at the owner. “This is news to me,” said the rapper’s lawyer. “She’s doing very well with probation, and she’s doing very well with her anger-management classes.” Um, somebody needs to show him Foxy’s report card.

• Eminem’s ex-wife is ripping the rapper, even dissing his sexual abilities. “I vomit in my mouth whenever I’m around him,” said the ex-wife. Rappers spit rhymes; their ex-wives spit, oh, never mind.
Posted by HighJive at 10:00 AM