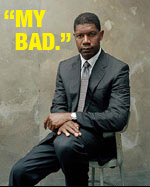 In good hands with a MultiCultClassics Monologue…

• The Virginia General Assembly unanimously voted to express “profound regret” for the state’s role in slavery — as well as “the exploitation of Native Americans.” The measure states government-sanctioned slavery “ranks as the most horrendous of all depredations of human rights and violations of our founding ideals in our nation’s history, and the abolition of slavery was followed by systematic discrimination, enforced segregation, and other insidious institutions and practices toward Americans of African descent that were rooted in racism, racial bias, and racial misunderstanding.” Delegate Frank D. Hargrove is probably hoping Blacks will now get over it already.

• A Virginia Beach Catholic high school principal is ordering sensitivity training for students who chanted “We love Jesus!” during a basketball game. The Catholic school was competing against a school with Jewish students. The principal said, “It was obviously in reference to the Jewish population of [rival] Norfolk Academy; that’s the only way you can take that. … It is important that we work harder at having students leaving here who are tolerant and understand how serious these kinds of things are.” What would Jesus chant?

• Indiana’s DePauw University is facing charges of bias in reference to sororities. Last November, the sisters of Delta Zeta interviewed members about their commitment to recruitment and ultimately ejected 23 members. But every member of the ejected group was overweight; plus, the group included the only Black, Korean and Vietnamese members. The members permitted to stay were all slender and conventionally pretty. “Virtually everyone who didn’t fit a certain sorority member archetype was told to leave,” said one member who opted to leave on her own. Perhaps the banned women can start a Dove Real Beauty sorority.

• The FDNY announced a significant increase in minority applicants, jumping from 3,730 in 2002 to 8,297 this year. “All the hard work we put into this [multimillion-dollar recruitment] campaign has paid off,” said Fire Commissioner Nicholas Scoppetta. “We hope once we begin hiring from this list next year, we’ll have the most diverse group of candidates joining the world’s greatest fire department.” There’s still a long way to go, as the FDNY is currently 91 percent White.

• The Rev. Al Sharpton learned and announced that his ancestors were slaves owned by relatives of the late South Carolina Sen. Strom Thurmond. “I have always wondered what was the background of my family,” said Sharpton. “But nothing — nothing — could prepare me for this.” Thurmond’s gotta be rolling in his grave as well.