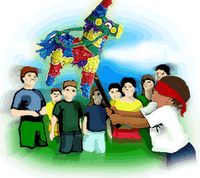 Beating the news with a MultiCultClassics Monologue…

• School officials at Santa Clara University are investigating a January off-campus party whose “South Of The Border” theme featured students mocking Hispanics. Partygoers dressed up as janitors, gardeners, gang members and pregnant teens. Damn, Santa Clara University students are clearly ignorant — they should realize a party like that must be held much later in the year during Hispanic Heritage Month.

• Cingular revised a commercial that made reference to an old minstrel song. The spot features a dude coming up with nicknames for his father-in-law named Jim, who ultimately offers “Jimmy Crack Corn” — from the tune titled “Blue Tail Fly,” a song about a slave mourning his master’s death. Consumer complaints prompted the cell phone company to edit out the remark. Talk about dropped lines.

• The Florida beauty shop owner who faced a spitting, hair-glue hurling Foxy Brown hopes to get an extreme monetary makeover (see Essay 1720). “I hired a lawyer. I hope to pay off my mortgage with whatever I get. … She definitely has to pay for what she did — one way or another,” said the owner of Queen Beauty Supply in Pembroke Pines. Talk about trying to turn Brown to green.

• A man accused of attacking Holocaust scholar Elie Wiesel was nabbed by cops in New Jersey (see Essay 1689). Officials charged him with attempted kidnapping, false imprisonment, elder abuse, stalking, battery and the commission of a hate crime. Looks like a guy who allegedly believes the Holocaust was a hoax will now be facing real imprisonment.

• A settlement was reached over conflicts involving the estate of civil rights icon Rosa Parks, negating the need for a trial between relatives and the institute bearing Parks’ name. So the Parks family doesn’t have to worry about sitting in the back of a courtroom.
Posted by HighJive at 11:16 AM

Had no idea that's what "Jimmy Crack Corn" was all about. As a young Yankee, I always assumed it was a dog or other farm animal saying "my master's gone away"
Same way Yankees have no idea why "eeny-meeny-miney-moe" is offensive. In our version, it was a tiger that got caught by the toe.