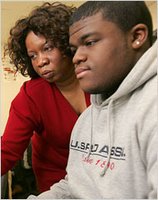 In Bid to Ban Racial Slur, Blacks Are on Both Sides

Days after Michael Richards’s racist tirade at a Los Angeles comedy club, Leroy G. Comrie Jr., a New York City councilman, seethed as he listened to some black teenagers on a Queens street spewing out the same word Mr. Richards had been using.

“They were saying ‘nigga’ or ‘niggas’ every other word,” said Mr. Comrie, who is black. “I could tell they didn’t get it. They don’t realize how their self-image is debilitated when they use this awful word in public.”

So Mr. Comrie sponsored a resolution for a moratorium on the use of the n-word in New York City, prompting a spate of similar proposals in half a dozen local governments across four states in recent weeks. The New York City Council is scheduled to discuss Mr. Comrie’s proposal tomorrow and vote on it on Wednesday; the City Council in Paterson, N.J., and the Westchester County Legislature both unanimously approved such bans recently.

(Mr. Richards, who played Kramer on “Seinfeld,” has been invited to the New York City hearings; a Richards spokesman said that he would respectfully decline to attend.)

The measures, which describe the forbidden word as an “ignorant and derogatory” insult toward blacks, try to sidestep First Amendment questions by calling for “symbolic” bans only, meaning they do not have the force of law. Because they are largely aimed at blacks who use the word among themselves, the proposals have revived a debate over whether minority groups can co-opt epithets and make them empowering.

“There is a swelling population of black youth that use this word as if it is a term of endearment,” said Andrea C. McElroy, a black councilwoman who sponsored a ban on the racial epithet in Irvington, N.J., that was passed this month (pictured above, left). “And I think it is basically incumbent upon us to remind them of the story of what that word meant to so many of our ancestors. This is something we probably should have done years ago.”

[Click on the essay title above to read the full story.]
Posted by HighJive at 11:25 PM