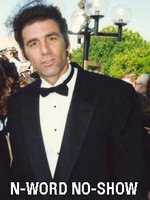 Bigot plans for the weekend with a MultiCultClassics Monologue…

• Michael Richards will not be meeting this weekend with the four Black men he targeted in the infamous comedy club tirade. A planned powwow will happen without the ex-Kramer because lawyers could not agree on the nature and purpose of the event. The men’s lawyer sought to gather a jury of a retired judge and two lawyers, but opposing counsel complained that he wasn’t given enough details regarding the potential participants’ identities. “I don’t even know who they’re planning to use as the retired judge, and we certainly haven’t had any agreement about it,” said Richards’ counsel. “That’s obviously a part of mediation. Both sides have to be comfortable with who the mediator is.” Richards is probably pushing for Jerry Seinfeld and Jason Alexander.

• Ex-NBA star Tim Hardaway is under fire for his rant that featured, “I hate gay people.” Activist groups and others have been quick to denounce Hardaway, and the league has banned him from appearing at the upcoming All-Star Weekend. “As an African American, I know all too well the negative thoughts and feelings hatred and bigotry cause,” said Hardaway. “I regret and apologize for the statements that I made that have certainly caused the same kinds of feelings and reactions. … I especially apologize to my fans, friends and family in Miami and Chicago. I am committed to examining my feelings and will recognize, appreciate and respect the differences among people in our society. … I regret any embarrassment I have caused the league on the eve of one of their greatest annual events.” Maybe Hardaway can organize a special All-Star Weekend featuring Michael Richards, Mel Gibson, Rosie O’Donnell and Isaiah Washington.

• The Hershey Company, creator of chocolate stuff, plans to cut about 1,500 people from its workforce and move some operations to Mexico. Names for the downsizing event include “The Hershey’s Kiss-Off.”

• Volkswagen becomes the latest advertiser to pull a commercial after public outrage. The automaker also presented a potential suicide, except this one involved an actual person who decides not to jump off a ledge after learning about great savings from Volkswagen. Damn, these advertisers can’t even be original with their rejected ideas.

• The Ohio couple that forced their foster kids to sleep in cages will spend two years in cages themselves, as a judge sentenced them to prison terms. During the sentencing session, the couple continued to argue the cages protected the kids from hurting themselves. The woman claimed one child once tried to jump from a second-story window. “Would you prefer that we let them jump? Either way, we’d be here. The difference is they’re still alive,” said the foster mom. No word yet from the American Foundation for Suicide Prevention.

• The University of Illinois has decided to end the reign of its Chief Illiniwek mascot next week, ultimately bowing to pressure from Native American groups and the NCAA. Of course, not everyone is happy to see him go. One person who portrayed the mascot in the 1990s said, “It is a dishonorable ending to 80 years of an honorable tradition. … The tradition and the origins and the efforts that we have made over the years have only been done in respect of the history of Illinois and the history of the Illinois tribe. To see that linkage and that appreciation go by the wayside … without an opportunity to find common ground is disappointing.” Let’s hope the Chief doesn’t try to jump off a bridge.
Posted by HighJive at 2:53 PM