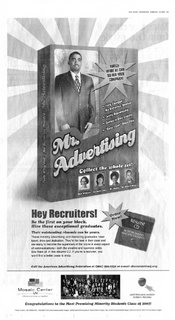 The American Advertising Federation closes out Black History Month with this full-page ad running in USA Today. Hyping the Most Promising Minority Students Class of 2007, the AAF seeks to persuade recruiters to hire the graduates.

There’s a lot to question about this effort.

First, is USA Today really the best vehicle to reach the intended audience? Hell, the ad didn’t even appear in the Money-Business section.

People in the know realize better tactics would include direct word-of-mouth and professional networking. In the Life section of a national newspaper, the message will probably generate more head scratches than job connections.

Collect the whole set! (Sadly, there are only about 50 figures available nationwide.)

Be the first on your block. (An admission that, especially if you’re on Madison Avenue, you’ll be the first to hire a minority?)

They’re the best in their class… If you’re a recruiter, you won’t find a better place to shop. (Potentially hurting the many minorities who weren’t lucky enough to be selected to join the MPMS program.)

Overall, not sure it’s right to position minority students as products to be purchased.

This execution, while a well-intentioned endeavor, is trying too hard. It’s another example of adpeople hoping to win an award via cleverness versus creating a solution that will be relevant, meaningful and effective.

[Thanks to makethelogobigger and copyranter for spotting the piece.]
Posted by HighJive at 1:31 PM

amen! collect the whole set indeed... why not just come with, "tokens of goodwill" or some other nonsense and be done with it?

hey what was that movie about the brother in the biz? putney swope?

somebody do that in an ad.

I heard they're coming out with a bobblehead line too.

As one of the 50, I really do hope they make a Bobblehead version of myself.

Sidenote though, the ad was placed in USA Today as it was one of the principal sponsors.