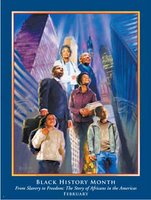 By Tracy Mack, a copy editor on the Tribune’s Metro desk

For those who question why a black woman would express such sentiments, rest assured it is not because I lack pride in my heritage. It is because I am proud to be a black American.

It has been said before, but it bears repeating: Black history is American history. The same could be said for all of this country’s ethnic groups. These histories have intertwined to make America unique, and they deserve equal respect.

To reduce these groups’ contributions to just one month of stories about “trailblazers” is ludicrous. As grateful as I am to Martin Luther King Jr., Malcolm X and Harriet Tubman, their stories have become obligatory sagas of Black History Month.

Unlike many of the blacks in recent years who have called for an end to Black History Month, I am not a mouthpiece for conservative Republicans. And although actor Morgan Freeman has been quoted as saying that he, too, believes the month should end, I disagree with his suggestion that racism will end if we stop talking about race. Race colors everything in America.

Black Americans’ history can be traced to the exploration of the continent.

In 1492, a black navigator named Alonzo di Pietro piloted one of Christopher Columbus’ ships on his first voyage to the Americas, according to one of my favorite books, “Great Negroes Past and Present.”

In 1513, 30 blacks were with Vasco Nunez de Balboa when he discovered the Pacific Ocean. A black pioneer named Estavanico, under the direction of the Spanish government, explored what is now Arizona and New Mexico.

The first blacks brought to Colonial Virginia were indentured servants who worked for their freedom, as were many of their poor white European counterparts.

In fact, a black man named Anthony Johnson, brought to Virginia in 1621 as a servant and slave, worked his way to freedom and by 1650 owned indentured servants/slaves himself, according to that state’s census.

It is difficult to tackle these stories and more in one month.

Most depressing is that the majority of American students are woefully deficient in the knowledge of their history, education assessment exams have shown.

In 2002, only 57 percent of 4th graders knew that differences over slavery in the North and South were one of the primary causes of the Civil War, according to the National Assessment of Educational Progress.

If the goal is for Americans to have a lasting understanding of blacks’ contributions to this great country, then neither Black History Month nor the current school curriculum seems to be working.

It’s time for a change.

I don’t pretend to know the complexities of setting school curricula. But I do know that black history has to be part of a larger, more thorough approach to history. If left on its own, black history might not seem important to some, and therefore, students might not enroll in the program.

For example, the racially integrated Oakton Elementary School in Evanston is experimenting with an African-centered learning program. African themes, topics and examples are incorporated into these classes throughout the day. Children sing the black national anthem, read books about African or African-American children, and shop for items at a make-believe Nigerian market when learning math concepts, among other things.

Although the program was open to all pupils in the district, only parents of African-American pupils opted in. Another problem is that the program is housed in a separate wing at the school. Critics fear that racial separatism might spill outside the classroom. Proponents say the enrolled youths are eager to learn, are more attentive and express pride in their heritage, but it appears only black pupils are reaping the benefits.

‘No Ethnic Group Left Behind’?

I advocate a more inclusive approach. Although many decry the federal No Child Left Behind act, which sets high learning standards and accountability in schools, I believe it lays a foundation for our thoughts about history. Perhaps there should be a federal “No Ethnic Group Left Behind” act, which sets higher standards for U.S. history education.

One option would be to require that students take an American history course as well as an ethnic-group history course (each group with its own course), every year from K through 12.

At first I thought my idea to end Black History Month was unique. Carter G. Woodson had the wrong idea when he started Negro History Week in 1926, I thought. But I discovered that Woodson never intended for the week, which was renamed and turned into a monthlong celebration in 1976, to be a permanent fixture.

He thought black history should be included in American history and that a month is not enough time to learn one group’s significant contributions.

“Woodson spoke of the day when Negro History Week would be unnecessary, but on this point he is often misrepresented,” said Daryl Scott, chairman of the history department at Howard University and a spokesman for the Washington-based Association for the Study of African American Life and History, a group Woodson founded in 1915.

Mr. Woodson, I agree with you. That day has come.
Posted by HighJive at 11:07 AM