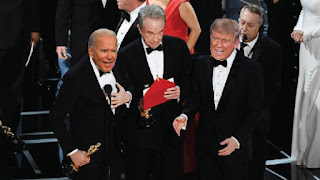 Imagine if President Donald Trump is correct in his bizarre contention that he won the election. For Vice President Joe Biden and Senator Kamala Harris, it would be like the La La Land creators mistakenly accepting the Best Picture Oscar in 2017 before having to concede to the Moonlight crew. Maybe Trump will recruit his pal Kanye West for support.