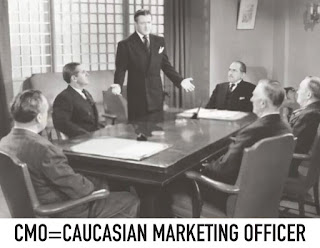 Advertising Age reported an ANA study revealed a lack of diversity among Chief Marketing Officers, with only 12% of CMOs identifying as Black, Latino or Asian. Shocking. So, for anyone hoping that CMOs demanding diversity from White advertising agencies would bring dramatic change to the industry, well, do the math.

Only 12% of top marketing positions are held by people of color, according to ANA study

The marketing industry remains plagued by a lack of diversity in top-level jobs, with just 12% of chief marketing officer positions filled by Black, Hispanic or Asian people, according to a new study from the Association of National Advertisers.

The lack of diversity inside ad agencies and marketing departments has been discussed for years but is under new scrutiny this year in the wake of calls for racial justice sparked by the police killing of George Floyd in May and the ensuing protests. Company after company has made public pledges to boost their diversity and do more outreach to people of color. But the ANA report shows how far the industry must still come—and how little progress has been made inside marketing departments in recent years to boost diversity, especially for top-level positions.

“Ethnic diversity remains poor from the senior level on down, especially for African-American/Black and Hispanic/Latino [people],” the report concludes.

White people accounted for 88% of CMO or CMO-equivalent jobs in both 2020 and 2019, and 87% in 2018, according to the report, which comes from the ANA’s Alliance for Inclusive and Multicultural Marketing and is derived from three separate surveys of ANA and AIMM members. Black people hold just 3% of CMO-level jobs, unchanged from 2019 and 2018.

The industry continues to make better progress on gender diversity: 52% of top marketer positions are now held by women, up from 47% in 2019 and 45% in 2018. Women comprise even a greater percentage of jobs when lower-ranking positions are included—of 30,940 marketing department members surveyed, 67% are women. The gender balance has reached a place where ANA in the report actually states that “the industry needs to better understand why more young men are not entering (or remaining in) the marketing industry.”

The ethnic diversity numbers are a bit better when lower-ranking positions are included, with 6% of 27,974 respondents reported as Black, 10% Asian and 8% Hispanic. But companies still have a long way to go to make their marketing departments representative of the general population, of which 13% is Black, according to U.S. Census figures.

If there is a silver lining, it is that some marketers in recent months have made strides to fill top jobs with people of color.

The ANA report gathered feedback for strategies various companies have made to increase diversity. Some of the recommendations the report called out include establishing a quarterly diversity scorecard “measuring progress toward meeting goals for women and people of color,” as well as leveraging relationships with historically black colleges and universities (HBCUs) for future talent and recruitment.

Other advice included establishing employee referral bonus programs. One unnamed respondant noted that “allowing for remote work instead of having to be based in our HQ city has helped us include non-local diverse talent” and that “opening up offices outside of San Francisco (where we are headquartered) has helped.”