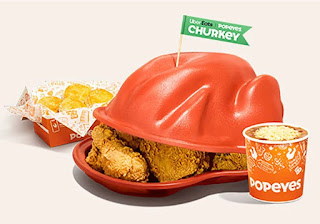 Advertising Age reported on a Thanksgiving gimmick from Popeyes and Uber Eats—a “Churkey” meal featuring chicken and fixings in a turkey-shaped container. Oddly enough, the deal is not available on Thanksgiving, as Popeyes is closed on the holiday. Further confusing is how the “Churkey” conflicts with the annual Popeyes promotion for pre-ordered Cajun turkey. Of course, neither offering is being cooked by Annie the Chicken Queen—who is likely spending Thanksgiving with Aunt Jemima, Uncle Ben and other “retired” advertising icons. 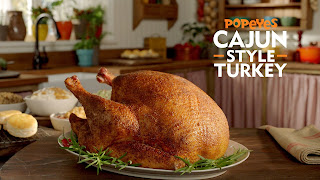 A ‘Churkey’ is Uber Eats And Popeyes’ Answer To Those Who Prefer Chicken For Thanksgiving.

Why spend hours roasting a turkey when in a matter of minutes you can have—Churkey? Uber Eats has teamed up with Popeyes to offer diners an alternative to your typical time-consuming bird. In a digital and in-app promotion, the brands are promoting the new “Churkey” meal, which consists of an eight-peace family meal, one large side and four biscuits, for about $19.99.

To drive home the point that the offering is the perfect seasonal stand-in for Thanksgiving fowl, Uber Eats and Popeyes’ digital ads depict the meal in a turkey-shaped container, which opens to reveal the various pieces of fried chicken goodness. That said, the Churkey meal doesn’t actually come in a turkey and isn’t even available on Thanksgiving (Popeyes restaurants will be closed that day). But the brands suggest it will make a suitable “Friendsgiving” meal.

The effort was conceived with Special Group, the agency behind Uber Eats’ recent “Tonight I’ll Be Eating” campaign depicting unexpected duos like Mark Hamill and Sir Patrick Stewart as well as Simone Biles and Jonathan Van Ness. The agency conceived the ads, which feature witty lines like Turkey is great when it's’ chicken” and “Turkey never tasted so chicken.”