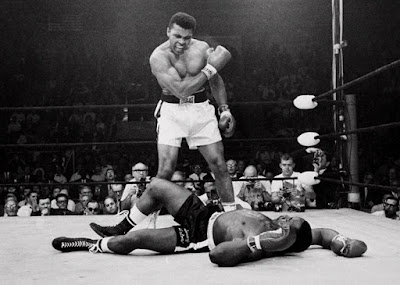 Muhammad Ali, Titan of Boxing and the 20th Century, Dies at 74

Muhammad Ali, the three-time world heavyweight boxing champion who helped define his turbulent times as the most charismatic and controversial sports figure of the 20th century, died on Friday. He was 74.

His death was confirmed by Bob Gunnell, a family spokesman.

Ali was the most thrilling if not the best heavyweight ever, carrying into the ring a physically lyrical, unorthodox boxing style that fused speed, agility and power more seamlessly than that of any fighter before him.

But he was more than the sum of his athletic gifts. An agile mind, a buoyant personality, a brash self-confidence and an evolving set of personal convictions fostered a magnetism that the ring alone could not contain. He entertained as much with his mouth as with his fists, narrating his life with a patter of inventive doggerel. (“Me! Wheeeeee!”)

Ali was as polarizing a superstar as the sports world has ever produced — both admired and vilified in the 1960s and ’70s for his religious, political and social stances. His refusal to be drafted during the Vietnam War, his rejection of racial integration at the height of the civil rights movement, his conversion from Christianity to Islam and the changing of his “slave” name, Cassius Clay, to one bestowed by the separatist black sect he joined, the Lost-Found Nation of Islam, were perceived as serious threats by the conservative establishment and noble acts of defiance by the liberal opposition.

Loved or hated, he remained for 50 years one of the most recognizable people on the planet.

In later life Ali became something of a secular saint, a legend in soft focus. He was respected for having sacrificed more than three years of his boxing prime and untold millions of dollars for his antiwar principles after being banished from the ring; he was extolled for his un-self-conscious gallantry in the face of incurable illness, and he was beloved for his accommodating sweetness in public.

In 1996, he was trembling and nearly mute as he lit the Olympic caldron in Atlanta.

That passive image was far removed from the exuberant, talkative, vainglorious 22-year-old who bounded out of Louisville, Ky., and onto the world stage in 1964 with an upset victory over Sonny Liston to become the world champion. The press called him the Louisville Lip. He called himself the Greatest.

Ali also proved to be a shape-shifter — a public figure who kept reinventing his persona.

As a bubbly teenage gold medalist at the 1960 Olympics in Rome, he parroted America’s Cold War line, lecturing a Soviet reporter about the superiority of the United States. But he became a critic of his country and a government target in 1966 with his declaration “I ain’t got nothing against them Vietcong.”

“He lived a lot of lives for a lot of people,” said the comedian and civil rights activist Dick Gregory. “He was able to tell white folks for us to go to hell.”

But Ali had his hypocrisies, or at least inconsistencies. How could he consider himself a “race man” yet mock the skin color, hair and features of other African-Americans, most notably Joe Frazier, his rival and opponent in three classic matches? Ali called him “the gorilla,” and long afterward Frazier continued to express hurt and bitterness.

If there was a supertitle to Ali’s operatic life, it was this: “I don’t have to be who you want me to be; I’m free to be who I want.” He made that statement the morning after he won his first heavyweight title. It informed every aspect of his life, including the way he boxed.

The traditionalist fight crowd was appalled by his style; he kept his hands too low, the critics said, and instead of allowing punches to “slip” past his head by bobbing and weaving, he leaned back from them.

Eventually his approach prevailed. Over 21 years, he won 56 fights and lost five. His Ali Shuffle may have been pure showboating, but the “rope-a-dope” — in which he rested on the ring’s ropes and let an opponent punch himself out — was the stratagem that won the Rumble in the Jungle against George Foreman in 1974, the fight in Zaire (now the Democratic Republic of Congo) in which he regained his title.

His personal life was paradoxical. Ali belonged to a sect that emphasized strong families, a subject on which he lectured, yet he had dalliances as casual as autograph sessions. A brief first marriage to Sonji Roi ended in divorce after she refused to dress and behave as a proper Nation wife. (She died in 2005.) While married to Belinda Boyd, his second wife, Ali traveled openly with Veronica Porche, whom he later married. That marriage, too, ended in divorce.

Ali was politically and socially idiosyncratic as well. After the attacks of Sept. 11, 2001, the television interviewer David Frost asked him if he considered Al Qaeda and the Taliban evil. He replied that terrorism was wrong but that he had to “dodge questions like that” because “I have people who love me.” He said he had “businesses around the country” and an image to consider.

As a spokesman for the Muhammad Ali Center, a museum dedicated to “respect, hope and understanding,” which opened in his hometown, Louisville, in 2005, he was known to interrupt a fund-raising meeting with an ethnic joke. In one he said: “If a black man, a Mexican and a Puerto Rican are sitting in the back of a car, who’s driving? Give up? The po-lice.”

But Ali had generated so much good will by then that there was little he could say or do that would change the public’s perception of him.

“We forgive Muhammad Ali his excesses,” an Ali biographer, Dave Kindred, wrote, “because we see in him the child in us, and if he is foolish or cruel, if he is arrogant, if he is outrageously in love with his reflection, we forgive him because we no more can condemn him than condemn a rainbow for dissolving into the dark. Rainbows are born of thunderstorms, and Muhammad Ali is both.”

I'm so jaded at this point that I know we'll see Muhammad Ali in ads for Gatorade, Nike, Ford, take your pick, "uplifting and powerful" shortly.

They'll all be designed by entirely white agencies, hire maybe That One Black Copywriter at best, and nobody in the industry will talk about how sad it is that we live in an age where there's not that many more people that look like Ali, in high agency positions, than when he started fighting.