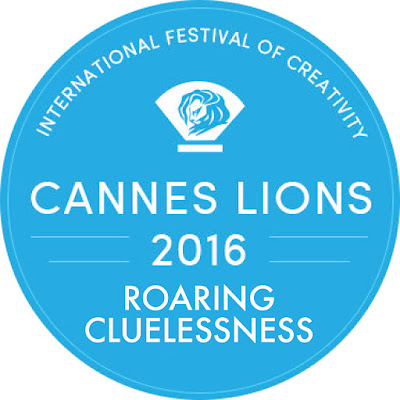 Campaign asked a bunch of predominately White Cannes attendees, “What will dominate the conversation at Cannes?” and “What should dominate the conversation at Cannes?” Funny how the trade publication recognized a distinction between the discussions that “will” and “should” happen. Whatever. The responses covered a diversity of diversity-related opinions. Here are excerpts from the “will” and “should” categories, along with MultiCultClassics comments for each:

Okay, this quote technically isn’t about diversity, but its ageist and sexist tone is pretty amusing.

Diversity. Yes, I know, we talk about it every year. The fact we’re still talking about it says there’s still a problem. Sure, small steps can be made to resolve the matter in the short term, but long-term change means investing time in our industry’s future. It starts with supporting women-in-advertising groups like AWNY and getting actively involved in their conferences or making our industry more visible to the wealth of talent at historically black colleges.

Yes, let’s talk about it every year—then address it with the same tired solutions that have proven ineffective. Start by promoting White women, followed by scheduling visits to HBCUs and inner-city communities to identify—but not actually hire—non-White candidates.

After an intense few months of well-publicized industry messes when it comes to our overwhelming sameness, workplace diversity will dominate the conversation—and the optics—at Cannes this year. Less “too many guys, one girl,” more attention called to who’s really creating the kind of change we need.

This person seems to be pushing a diverted diversity platform, given the gender equality undertones in the statement. But who is “really creating the kind of change we need”—and what have they really accomplished to warrant receiving attention? Gee, isn’t winning a Glass Lion recognition enough?

Ways JWT fu*cked up while handling the Gustavo Martinez case and how our industry can be better about owning up to our mistakes. How all the folks that go up on stage to receive awards, all look the same in spite of this being the “INTERNATIONAL festival of creativity.” Cindy Gallop’s chat on being pro-sex and pro-porn and knowing the difference to humanize the advertising message.

I hope to hear a lot more conversations that address the talent and industry’s gender equality issue—I’ve been fortunate enough to be in an agency where culture and talent development are a priority, but I also know that being a women in data is still considered an exception rather than the norm, so I would love to hear more about the industry’s collective stance on changing that.

Diversity. But not in the workforce—in how we think about whom we’re talking to as brands, and importantly, from whom we take inspiration. American marketers have an unhealthy coastal/urban/upper-middle-class bias that’s increasingly distressing. When we talk about “millennials,” for instance, we’re talking largely about relatively wealthy, white, highly educated city dwellers. Prince showed us that amazing culture and creativity could come from anywhere and stay there successfully. Life is full of interesting aspirations that don’t always stem from who we’ve deemed “trendsetters”—to discount them is a mistake that deserves more attention. At the end of the day, both topics are tied deeply together. Too often, we talk to and about ourselves. Maybe by solving the “will be talked about” problem, we can solve the “should be talked about” problem too.

This meandering mush came from a strategist. ‘Nuff said.

I think the advertising industry often reflects culture, and at our best, we lead culture. Conversation in culture currently is rife with equality and diversity issues. The conversation for our industry, and at Cannes, should be around how we can lead our culture away from division and disadvantage and toward opportunity, creativity and a full life for all of us. The conversation around women’s rights, gay rights, religious rights, all of our rights, is a conversation about equality. For our industry, we have a real cultural opening to show how equality belongs to every one, every single one of us; that equality is not about taking anything away from anyone, but about giving to everyone. Equality, we have all agreed, is a right, but until it shows up that way, this industry has the talent, power and exposure, right now, to make equality something we can create, together.

I'm gonna give Cindy Gallop half a clap because she seems about half-woke. I have hope.

Of all the 3% women speaking up about diversity she's the one who has started to mention women of color every now and then.

If someone's going to sit up and eventually notice that all this talk of diversity has only resulted in white women getting promoted in 2016, I've got money on her.

Meanwhile, on this side of the world: startribune.com/twin-cities-ad-industry-struggling-to-increase-diversity-in-ranks/383464901/