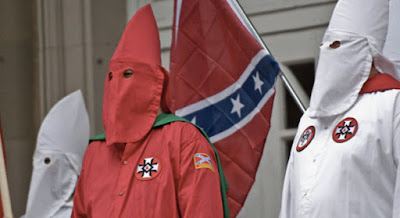 Advertising Age published a perspective titled, “Five Ways Agencies Can Dismantle Systems Keeping Diversity Out”—and the author declared White supremacy is a root cause of the global dilemma. Actually, White supremacy is not as big a problem as White complacency in our industry. That’s why the “Five Ways” don’t present a true solution. Why would Madison Avenue’s ruling majority consider taking five action steps when they haven’t even bothered to take a single step toward progress? Hell, the typical advertising agency leader makes the average Grand Wizard look like a Boy Scout.

I’m grateful to those taking up the charge to build an industry reflective of the world we live in, though we would be remiss to talk about the progress we’re working toward without addressing the most pressing and uncomfortable issue keeping diversity out of agencies. I’m talking about white supremacy—a core component of inequality most ad agency folks are reluctant to acknowledge.

Wait! Don’t stop reading, I know it seems dramatic to see the words “white supremacy” and “ad agency” in the same sentence, but hear me out. My hope in writing about such a charged topic is not to shame our industry, but rather to start a conversation about the root problem preventing us from being inclusive. Once we move past the initial shock, it becomes clear that white supremacy is nearly invisible in our everyday lives—all the more reason to call it out.

White supremacy is an ugly term with an uglier past, conjuring images of Nazis and the KKK, undoubtedly two of the reasons it’s uncomfortable talking about it. It’s a shameful part of our history we’d rather bury because acknowledging it means we’re complicit and that’s all it takes to shut most of us down. That said, it’s critically important to acknowledge a much wider definition of white supremacy apart from the overtly racist symbols of Civil Rights-era America and hate groups. It’s our misguided aversion to the subject of white supremacy that keeps wide-reaching, sustainable diversity beyond our grasp.

Our industry was born to push against complacency and yet when it comes to issues of race we find ourselves quietly burrowing into it. We navigate our way through oftentimes cloudy conversations about diversity without understanding that it is we who continue to hold it back. But we can do something about it.

Here are five immediate actions we must take to meaningfully address the structural inequities in our industry. I offer these in addition to best practices such as recruiting from historically black colleges and universities and Hispanic-serving institutions; tapping professional organizations dedicated to advancing young people of color; continually investing in employees of color via mentorship; and unconscious bias training for managers:

1. Remove four-year college degree requirements, create an apprenticeship program for new talent (or partner with an organization like BrandLab), and recruit from places like community and technical colleges.

2. Create culturally competent agency leaders. There are organizations in every major market dedicated to helping people learn about racial equity (shout out to Interaction Institute for Social Change and the YWCA).

3. Get other white people thinking critically about race by facilitating discussions with co-workers in a judgment-free zone where they don’t have to be afraid of saying the wrong thing.

4. Make it easy for agency employees to develop a deeper understanding of race and racism by organizing a listserv, blog or book club dedicated to articles, podcasts and books by people of color.

5. Don’t monopolize the conversation. You should be listening more than talking in conversations with people of color who are working to address our industry’s structural inequities.

It’s time to get comfortable being uncomfortable. Our privilege will always prevent us from perfectly navigating discussions about race and inequity. We’ll make inaccurate statements and ask awkward questions in front of friends and colleagues of color. I’ve personally fumbled my way through countless conversations about race, I’ve inadvertently offended people I respect, and I’ve resigned myself to continue trying. What matters is that we don’t let shame or pride get in the way of progress. And that we don’t try to fool ourselves into thinking we’re making measurable strides toward an inclusive future unless we’re also willing to talk about the ways the industry we built is set up at the expense of diversity.

Bethany Iverson is director of strategy at Space150, a full-service digital ad agency.

I appreciate this woman's attempt, and it's a start, but there are still issues.

This assumes that the only thing holding people of color back from getting agency jobs is that enough of the pool doesn't have a college degree to start with. In my experience, there are plenty of us with degrees, we're just not getting hired or promoted. The students who are in college, looking at advertising as a potential career, are probably not (with all the rape-y and harassment lawsuits in the news) not finding an appealing industry to gravitate towards.

The YMCA? Really? See #1 above. You can't jump over the people of color already in and waiting to get into the system by going to the fucking YMCA, that's insulting. Try HIRING SOME DAMN PROFESSIONALS OF COLOR TO START WITH.

3. Get other white people thinking critically about race by facilitating discussions with co-workers in a judgment-free zone

Or, you could just hire some damn minorities so that instead of one person of color having to explain every damn ethnic thing to a room full of 18 white people, there was a mass of people of color who could get down to the creative work at hand instead of turning every session into Let's Talk About Basic Ethnic Advertising 101. Shocker, minority ad agencies already do this every day. It's only now that General Market agencies are eating up all the ethnic market crumbs that we have problems with dozens of white staffers not being able to navigate ethnic waters as easily, if at all.

4. Make it easy for agency employees to develop a deeper understanding of race and racism by organizing a listserv, blog or book club dedicated to articles, podcasts and books by people of color.

Or, JUST HIRE A CRITICAL MASS OF PEOPLE OF COLOR so that agency staff can talk it out amongst themselves instead of having to read The Joy Luck Club. That seems a lot faster and smarter and a better use of billable time.

5. Don’t monopolize the conversation. You should be listening more than talking in conversations with people of color who are working to address our industry’s structural inequities.

“Five years in to the 3% Movement (can you believe it?), there's an interesting phenomenon we're seeing. Top female creative talent is in such hot demand that it's being poached. Creative women of color are even more in demand.”

You know who’s not in demand? Creative black men of color.

Creative white women of color, yes. Check the trades, there’s no shortage of them getting hired and promoted.

Creative foreigners of color, yes. Ditto on all above. On the rare occasion it’s not a white woman getting hired, it’s one of these.

Creative women of color, well, I guess the jury is out on that one. What the 3% Movement claims is counter to what I’m seeing with my own eyes.

Black male creatives? Not making any forward progress and if I had to put my own personal opinion in here, getting pushed to the back of the line in favor of white women and foreigners.

Hi, I'm the author of the adage article about white supremacy. Your critique about white complacency is a fair one and is an idea I don't hear white folks in ad land talking about today. Articles like mine will always fall short of solving the problem in its entirety and I fully acknowledge that. My greater goal in talking about white supremacy was to address the structural issues our industry faces...white supremacy is not a term agencies are comfortable talking about and I think we need to get over that if we want to start having more real conversations about race and discrimination in our industry. Very much appreciate your critical feedback and this blog as a whole.

I want to clarify why I talked about the YWCA per the above comment: the YWCA does awesome racial justice training (as does IISC), and I called them out specifically because most white agency leaders don't have a super deep or working knowledge of racial inequities. The Y regularly facilitates important conversations on the topic and white people could learn a lot from them. I think the YWCA as a critical and widely overlooked educational resource for agency execs.