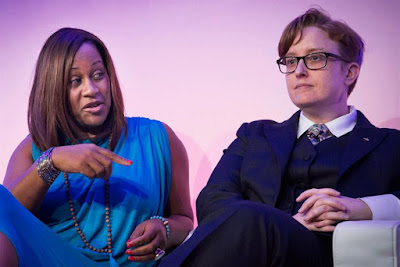 Campaign published quotes from a discussion on diversity in the advertising and media industries featuring MediaCom Chairwoman Karen Blackett and Stonewall CEO Ruth Hunt. “What’s really struck me about the media industry is a significant complacency,” declared Hunt. “There is assumption of meritocracy, an assumption that creative is meritocratic and an absolute instinct to only work with your friends and people you trust and worked with before.”

1. a feeling of quiet pleasure or security, often while unaware of some potential danger, defect, or the like; self-satisfaction or smug satisfaction with an existing situation, condition, etc.

Hunt hit the proverbial nail on the head. However, she failed to effectively qualify the complacency—“significant” is too polite. Better qualifiers include:

The quiet pleasure and smug satisfaction of exclusivity is an ethical, moral and legal violation that cannot be tolerated with complacency.

The advertising and media industry risks alienating clients and audiences because of its “complacent” attitude towards diversity, the chief executive of Stonewall has claimed.

Ruth Hunt, the chief executive of the LBGT equality rights charity, told Friday’s Media360 conference in Brighton that a “lack of imagination” was responsible to diversity not being taken seriously by agencies and media owners.

She said: “What’s really struck me about the media industry is a significant complacency. There is assumption of meritocracy, an assumption that creative is meritocratic and an absolute instinct to only work with your friends and people you trust and worked with before.

“There is a very insider and outsider culture in media. If you are in any way other from the main group of people, who like working with people like them who get what they’re thinking in two-and-a-half sentences.

“The limitation that has creates means you are missing a significant amount of different views within that group. You’re missing audiences and clients. Organisations we’re working with like the big banks won’t want to work with you because you’ll feel anachronistic.”

However, Hunt did single out Channel 4 for praise as the “crème de la crème” when it comes to diversity. Her fellow panelist Paul Sapsford, the broadcaster’s group continuity manager, talked about Channel 4’s Year of Disability 2016, which aims to increase on and off-screen representation of disabled people.

Separately, Channel 4 launched a competition at Advertising Week Europe last month, which will see £1m in airtime gifted to a brand that comes up with the best creative idea featuring people with disabilities.

Karen Blackett, the chairwoman of MediaCom, pointed to a vicious circle in which the media industry fails to attract ethnically diverse candidates because they do not see enough ethnic people in advertising, while a lack of diversity within agencies meant creative ideas lacked ethnic representation.

She said: “What we do is set cultural norms. If you don’t see yourself on screen, whether that’s in a programme on an ad that’s a clear issue, not just for altruistic reasons but for business reasons.

“If you’ve got purchasing power of BAME increasing in the UK by 10-fold, ad they’re not seeing themselves in an ad or programme, there’s no relevancy.”