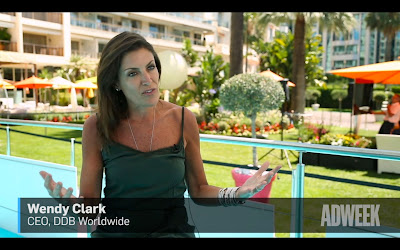 Adweek published a Cannes interview with DDB CEO Wendy Clark, who blathered on about the need for speed in today’s business environment. Clark also touched on diversity and diverted diversity, announcing all DDB employees will receive “unconscious bias” training by the end of 2016. Plus, the agency is partnering with a consultant specializing in gender equality, whose primary action steps will include auditing the current staff “to help DDB achieve a more balanced workforce within the next year.” Okay, but will DDB publicize the audit results—or will Omnicom continue to hide its EEO-1 data? Clark admitted diversity remains an industry problem and remarked, “Talk is good, but action is way better.” Of course, she didn’t connect the need for speed with the need to address DDB’s dearth of diversity. Heaven forbid diversity should be handled with any sense of urgency.

Wendy Clark says, ‘Talk is good, but action is better’

CANNES, France—“You have to ask yourself, are agencies changing enough to keep up with this changing marketplace?”

DDB Worldwide CEO Wendy Clark told Adweek that, as major clients like McDonald’s make increasingly strict demands of their advertising partners, all agencies must adapt as quickly as possible or risk being left behind.

“Our models now have to be built for speed. Clients and brands are moving in real-time,” she said, adding, “It has to be efficient [but] we can’t do that at the cost of great work.”

DDB has attempted to balance this contradiction in recent months by introducing a new model called Flex that will allow teams across its 12-office network to collaborate on pieces of business, thereby transcending the sort of multi-agency patchwork that frustrates so many client-side marketers.

Clark is also one of the industry’s most passionate advocates for increased diversity in the agency world. Earlier this week, J. Walter Thompson’s global chairman and CEO Tamara Ingram told Adweek that the conversation around diversity in advertising will continue for the foreseeable future, and Clark agrees—but she also thinks that most agencies have yet to effectively make the transition from talk to action.

“I don’t think we’re seeing enough movement and impact,” Clark said. DDB has now begun to institute “unconscious bias training” as well as partnering with a third-party “gender equity” firm that aims to help DDB achieve a more balanced workforce within the next year.

Will the Omnicom network’s efforts pay off? Clark’s success depends on it.

Oh, DDB is going to proudly shout its gender findings from the rooftops. Why would they hide that, when there's no shortage of women in any of their offices?

They'll get twisty with the numbers for sure ("Some of our highest-level management staff is over 70%!" and fail to mention that's in PR or whatever), but they're not going to hide their gender numbers. If those numbers look bad in certain areas, they'll just say they're striving to do better and set benchmarks and work on it.

Ethnic diversity on the other hand, speaking from my prior DDB experience, they'll either go completely radio silent, ignore the question, or do back bends to hide the truth.

In other words, they're going to pay a bunch of white people tons of money to run "unconscious bias" training, flaunt that the number of women in their agency is already pretty OK, lie and twist the ethnic diversity numbers if they discuss them at all, and business as usual otherwise.