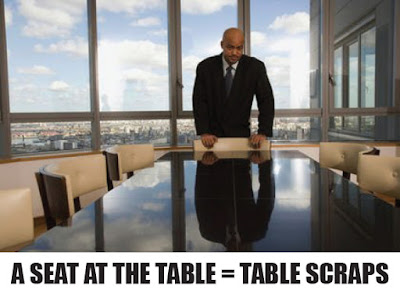 The way to fix [the problem of culturally clueless mishaps] is to bring the right people to the table. If you need copy, you get a copywriter. If you need art, then get an art director. If you need to speak to us and there’s no one around who can truly help, then get a translator who knows how to communicate with a diverse audience or can at minimum keep you and your brand honest before an idea goes from presentation to production.

The problem with this line of thinking lies in White advertising agencies—co-conspiring with clients—already acting on such advice.

For example, BBDO and Procter & Gamble created “The Talk” after hiring consultants of color to deliver the cultural insight.

So what were the end results?

The White advertising agency won a Grand Prix award at the Cannes Lions International Festival of Creativity for a My Black Is Beautiful project—a project that typically goes to minority advertising agencies. Plus, the White client produced propaganda that made them look progressive to the public.

Meanwhile, minorities were shut out from receiving substantial work (i.e., revenue). Additionally, minorities were relegated to, well, minority vendors. And actual diversity was stymied again, as it appears minorities are only necessary on a per-project consultancy basis.

To be clear, “The Talk” was not an isolated incident. Rather, it demonstrated a disturbing and discriminatory trend in the field. JP3 opened by stating, “In 2018, black culture seems to be simultaneously progressing and regressing.” In the advertising industry, Black culture continues to get hijacked—and Blacks get jacked up. The only thing progressing is the regressing.

In 2018, black culture seems to be simultaneously progressing and regressing.

As a Lincoln University alum, I couldn’t be more appreciative of Beyoncé’s Coachella performance, which has been justly recognized as an overdue, loud acknowledgment of the influence our nation’s historically black colleges and universities maintain. Then, while listening to his Black Panther soundtrack, a score for a film that completely obliterated previously-held records by surpassing $1.3 billion at the box office, I found out Kendrick Lamar went and won a DAMN. Pulitzer Prize.

At moments like these, it feels good to be black and have our heroes openly and proudly wearing their capes. For us, for the culture. Then I’m reminded, much to my chagrin, how for every step forward the culture takes, an unequivocal step back is taken by those “speaking on our behalf.”

This step back is filled with embarrassment and disappointment, like the Heineken “Sometimes, Lighter Is Better” campaign that was pulled from circulation and the inescapable H&M “Coolest Monkey in the Jungle” gaffe. Even most recently at the vortex of this cultural tug-of-war is Kanye West who mused that slavery was a “choice.” This is the same Kanye who has received 21 Grammys and 68 nominations and helped breathe new life into the adidas Originals brand. He is both a notable African American advancing the culture and a holder of seemingly retrograde views about his own race.

We push forward and get pulled back every day.

This is a complex topic. But at the risk of oversimplifying things, here’s how it stands: Just as African Americans continue to break new artistic and commercial ground, there is an undertow of hate and ignorance that is pushing the other way. The solution for this is both universal and personal.

Diversity needs to be prioritized in the spheres of highest influence

Campaigns like those from Heineken et al. occur when there is no diversity among people who are creating work for a diverse audience. Who are the decision-makers, the people in the driving seats of these campaigns? Do they look like me? Do they sound like me? Do they spend time in my barbershop, participate in my group chats? Do they shoot with me in the gym? Do they understand that reference I just made? They fundamentally don’t understand the nuances that I and those like me are likely to call out a mile away when we see an ad that so obviously misses the mark.

The way to fix that is to bring the right people to the table. If you need copy, you get a copywriter. If you need art, then get an art director. If you need to speak to us and there’s no one around who can truly help, then get a translator who knows how to communicate with a diverse audience or can at minimum keep you and your brand honest before an idea goes from presentation to production.

We need to be the loudest, best versions of ourselves

We should do everything in our power to make even the small steps feel huge and the already huge steps feel like moments of epic proportion. See Black Panther. We tweeted. We rallied. We pre-ordered. We put on our uniforms. And then we shamed those who didn’t see it within seven days. The support was genuine; the will to help win was unrivaled.

Let’s always do that on every scale imaginable. Beychella and Kendrick’s DAMN. accomplishments are impressive and absolutely necessary, but we can incite meaningful, culturally charged moments on a smaller scale. Let’s get as passionate, as vocal and as enthusiastic about Ta-Nehisi Coates’ “I’m Not Black, I’m Kanye” Atlantic piece, D’Ussé directly endorsing The TNTH’s D’usséPalooza and Diddy dropping over $21 million on Kerry James Marshall’s “Past Times” painting. Those are moments that deserve Black Panther-level ratification.

Your voice, no matter the size, is still a voice. One that has the power to influence and move the masses in the right direction. Let’s all accept that responsibility, leverage the collective and overshadow the mishaps of the H&Ms, Heinekens and Doves so they learn to know better than to even try it. Let’s work together to make a big deal out of greatness, no matter how big or small, so it becomes the standard and so those cases become not just dashing instances but real cultural barometers.

My issue with "integrating culturally competent teammates" is that it sounds great in theory, but in practice what I see with my own two eyes is entire multicultural agencies filled with POC being dismissed, and replaced instead with a white agency that hires a single POC copywriter, art director or translator (usually freelance or without any real clout).

Brands never gave anything other than crumbs to those multicultural agencies to begin with, but lots of POC were in those agencies and had a voice and career and occasionally the chance to do good, original work. They hired other POC so there was an ecosystem from the agency to the vendors to the talent.

Now we have white agencies getting paid an entire pie instead of crumbs to do Black History Month or some version of "My Black is Beautiful" type ads, and if you scratch the surface it's one or two black consultants, and every other credit from the owner of the agency to the photographer, casting agent and media placement is nothing but white.

And we're not supposed to notice that or say anything other than WOW, HOW DIVERSE! WHAT DIVERSITY! THE MOST DIVERSE DIVERSITY OF ALL AGENCIES! BRAVO!

It's not right. POC lost and are losing jobs and careers left and right.