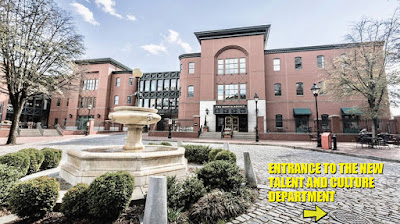 Adweek reported on the latest shenanigans at The Martin Agency, which invented a Talent and Culture department and tapped a White woman to run it. New Director of Strategic Engagement Kelsey Larus—dubbed by Chief Culture Officer Carmina Drummond as an “interesting, interesting hire”—was discovered via LinkedIn and lacks any advertising agency experience. Larus has worked for the Obama Administration and Democratic Party; and fittingly, her hiring feels like a political maneuver. Drummond remarked, “We needed someone objective and who valued us. We actually brought [Larus] in for an interview not knowing how we might utilize her.” Based on the Adweek article, The Martin Agency executives still aren’t sure how Larus might be utilized. Or maybe Drummond’s gobbledygook makes complete sense to everyone except the MultiCultClassics editorial staff. For now, it appears the White advertising agency just hired a Chief Divertsity Officer—not to be confused with Chief Diversity Officers—which is actually an original stunt.

IPG’s The Martin Agency has created a new Talent and Culture department aimed at driving change and progress among its staff seven months after the ouster of longtime chief creative officer Joe Alexander due to sexual allegations made against him.

To lead the department, The Martin Agency hired Kelsey Larus as director of strategic engagement. Larus will report to chief culture officer Carmina Drummond, who picked up that title in March.

Drummond told Adweek that Larus is an “interesting, interesting hire,” as her background is certainly not in advertising. Larus worked for the Obama Administration, both in the White House and on President Obama’s campaigns. She also served as the director of housing for the 2012 Democratic National Convention and worked on two presidential inaugurations.

The Martin Agency discovered Larus through LinkedIn, and Drummond said the shop was immediately drawn to her background in “driving organizational change,” as internal issues that needed to be addressed were not solely “advertising issues or Martin Agency issues, but company issues.”

“We went through a really tough December, and the agency needed to heal,” Drummond added. “We needed someone objective and who valued us. We actually brought her in for an interview not knowing how we might utilize her.”

Drummond said Larus came aboard about six weeks ago.

“We are always looking for new talent but we also have tremendous talent at the agency,” Drummond said, explaining that the department will be responsible for making sure all employees have the resources they need to be supported and the “foundation to own and nourish their careers.”

Drummond said the new department was born from the ideas of several “really smart people” who realized there is “a real hunger for aligning culture with business initiatives.” The department will ensure The Martin Agency is fostering an environment where staff can form relationships, have the right impact on the agency and feel they are fulfilling a purpose, according to Drummond.

“It just really clicked that this is how it needs to be done,” Drummond added.

The addition of the Talent and Culture department is just the latest development in The Martin Agency’s cultural transformation after Alexander left in December.

Most recently, the agency promoted senior creative Danny Robinson to the newly created role of chief client officer. Robinson is the first African American to serve on The Martin Agency’s executive committee and has been tasked with working with account management and creatives to unlock innovative ideas and identify growth drivers for clients.

Drummond noted that Robinson’s appointment also highlights The Martin Agency’s commitment to “understanding the capabilities of our talent” and transitioning them in roles that allow them “to look at things in a new way.”

Drummond was given the chief culture officer title after serving as the agency’s senior vice president and director of operations. She was promoted as part of The Martin Agency’s March initiative to double the representation of women on its executive committee. That initiative was led by The Martin Agency’s first female CEO in its 53-year history, Kristen Cavallo.

“Corporations often hide behind ‘fit’ and not ‘contribution’ as a metric,” Cavallo said in a statement. “Fit can be a rationale for homogeneity, and that’s dangerous. This is our chance to do things differently.”