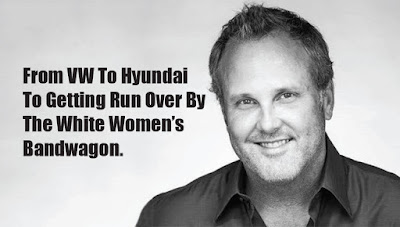 Adweek reported Innocean USA Chief Creative Officer Eric Springer got a slap on the ass and a kick out the door, becoming the latest male executive to leave a position under the cloud of sexual harassment. The drama actually surfaced in March, when news broke that a former female employee filed a lawsuit against Innocean USA and Springer, alleging sexual harassment, discrimination and retaliation. Springer initially took his case to Facebook to defend himself. However, a statement last week read, “Innocean USA and Eric Springer jointly announce that Eric has decided to resign as its chief creative officer to pursue other opportunities.” Stating that an alleged sexual harasser is leaving “to pursue other opportunities” sounds weird—as if the women at Springer’s next venture could find themselves being “pursued” in unwelcome ways. Whatever. Adweek also revealed The 3% Movement was hired to “develop additional solutions as warranted” for Innocean USA. Guess Kat Gordon has transformed her PR stunt into a pretty profit center—now White advertising agencies can go from sexist cesspool to certified safe zone fast and easy! Maybe Innocean USA will pledge money to the Diet Madison Avenue GoFundMe donation drive too.

A spokesperson confirmed that Springer is no longer with the agency as of today.

“Innocean USA and Eric Springer jointly announce that Eric has decided to resign as its chief creative officer to pursue other opportunities,” read a statement from the representative. “Innocean USA wishes Mr. Springer well on future projects.”

CEO Steve Jun sent an email to all staff announcing the news, according to three people with direct knowledge of the matter. Chief operating officer Tim Blett then reportedly read the note to employees and stated that all related legal matters had been resolved.

Two sources also told Adweek that the parties involved in the case agreed to a monetary settlement several weeks ago. The agency spokesperson stated that Innocean would have no further comment on the matter.

When Adweek initially contacted Innocean representatives regarding the settlement earlier this month, they wrote that the agency “does not comment on active litigation.”

Springer has not responded to a request for comment via social media.

Clingo Law Group and Lewis Brisbois Bisgaard & Smith, which represented Guenier and Innocean in the case, respectively, have not responded to multiple requests for comment.

The suit, officially filed in January in Orange County, Calif., claimed that Guenier had suffered from Springer’s “bullying and harassing style” of management since joining the agency in April 2016. The two had previously worked together at Deutsch, where she was a director of production and he was a creative director.

The suit claimed Springer “made plaintiff and other female employees feel physically threatened,” created “a hostile work environment” by using sexually suggestive or misogynistic language and initiated unwanted physical contact with Guenier. It also alleged that she filed multiple complaints with the agency’s COO and head of HR before being pushed out of her job in April 2017.

Innocean’s law firm, in turn, countered the filing by stating that Guenier had “unclean hands with respect to the events upon which the complaint … [is] based.” It did not cite specific evidence to back up these claims. The counterargument also stated that Guenier had failed to exhaust all options available to her under company policy, California state law and the Civil Rights Act of 1964.

The agency placed Springer on leave less than one week after news of the suit broke, announcing that it had launched an internal investigation and both hired an external HR advisor and brought on advocacy group The 3 Percent Conference to “develop additional solutions as warranted.”

In April, Springer defended himself in a public Facebook post, writing, “These accusations are false.” He went on to state that he and Guenier had “nothing but a positive, productive, professional relationship” and shared screenshots of notes and text messages exchanged between the two.

Springer presented one specific email in which Guenier appeared to discuss her departure from Innocean as evidence that she had not been forced out of her job, writing, “This obviously negates the possibility of a ‘wrongful termination,’ since she resigned.”

While he did not address all claims made in the suit, he did dispute the assertion that he had “slapped Victoria on her butt.”

The post has since been deleted or made private.