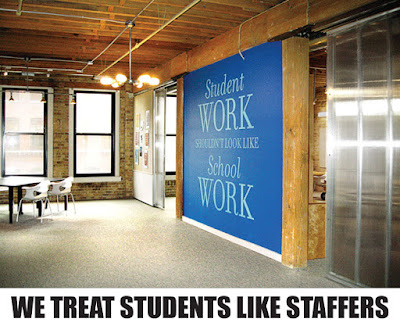 AgencySpy posted about the Chicago Portfolio School, where faculty and students evacuated the building after a landlord eviction. The Chicago Portfolio School Founder and Director said the school “is in good financial shape” and making plans to move to another location. The scenario is actually providing students with a primer for an advertising career. After all, it’s not uncommon for staffers to show up for work and discover the agency has gone under. Hell, such occurrences usually include employees being locked out of the building and denied final paychecks. And the leader who insists the enterprise “is in good financial shape” is probably full of shit. When tenants are forced to “unexpectedly” vacate the premises, that’s definitely a red flag. Welcome to adland, kids!

After a very unfortunate series of events at the end of this week, the Chicago Portfolio School plans to relocate from its current location at 213 West Institute Place.

Yesterday, all students and staff were forced to leave the building unexpectedly.

“Simply put, we are in a rent dispute with our current landlord,” wrote founder and director Jeffrey Epstein. “We were asked to leave the space until the dispute has been settled which we hope will happen in the next day or two.”

Despite the momentary evacuation, Epstein said that the school is “is in good financial shape,” that all staff members have been paid in full, and that Fall classes will soon begin as scheduled.

The news led to a thread on r/advertising, where students confirmed that they received an email yesterday afternoon indicating classes would be cancelled for a week. One member wrote, “eviction is not just a dispute.”

According to Epstein, management then made “emergency plans” to hold classes in a nearby WeWork space in case the negotiations took longer than expected.

Now, however, the school and lawyers representing its building’s landlord appear to have reached an agreement regarding rent. “We are working together for plans to stay in the space for an orderly transition to our new location,” Epstein wrote.

It is unclear at this time where that new location will be.