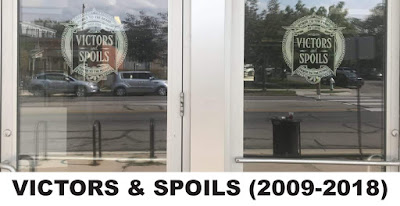 Adweek published a way-too-long report on the closing of Victors & Spoils, an inevitable event that, ironically, failed to draw a crowd. Honestly, the only entity that bought into the enterprise (literally and figuratively) was Havas—and the lame holding company ultimately shut it all down.

Adweek had the stupidity write a headline that read, “End of an Era as Havas ‘Crowdsourcing Agency’ Victors & Spoils Closes Shop.” End of an era? End of a really bad idea would have been more accurate.

The official Havas statement announced, “We are reducing the V&S footprint and reallocating any continuing clients to our Havas Chicago office.” Giving remaining work to Havas Chicago is like crowdsourcing to Lloyd Christmas, Harry Dunne, Moe, Larry, Curly, Shemp and Eric Trump.

“All in all, the experience of working with Havas as the global chief innovation officer was a good one,” said V&S Co-Founder John Winsor. “I had the honor to work with David Jones, who is one of the true visionaries of the industry, and had a chance to learn the complexities of working on a global basis.” Yeah, now Winsor is officially a world-class sycophant and huckster.

“I’m surprised V&S ended up closing their doors,” said former Havas CEO David Jones, who green-lighted the V&S acquisition in 2012. “I imagine losing their brilliant founder, John Winsor, was a fairly terminal blow, but I do think the huge success of other people-powered marketing businesses like Mofilm, Tongal, Vidmob and Vidsy that are built on the same people-powered principles as Uber and Airbnb would suggest their demise wasn’t due to the model.” Gee, guess the “true visionary” didn’t realize the ad game isn’t the same as chauffeuring with your own wheels or renting out a spare room. Then again, holding companies and crowdsourcing have helped ignite the commoditization of creativity—leading to generic mediocrity across the industry.

Idiots like Winsor and Jones don’t even realize their current situations prove how the advertising industry has degraded. That is, a “brilliant founder” and “true visionary” can get booted, and life churns on without them. Everyone is disposable and replaceable—especially Winsor and Jones.