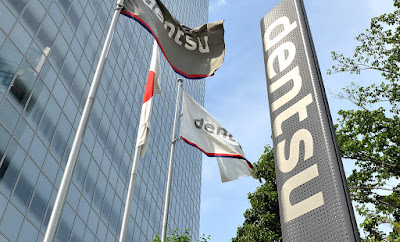 Adweek reported Dentsu Inc. is considering a restructuring scheme that would divide the enterprise into a holding company and an operating company. So instead of being one shitty company, Dentsu would become two shitty companies. Seems like even the holding companies are starting to see the business model is flawed and increasingly outdated. It might be fitting that Dentsu is taking an initiative for change, as Japan has often been a leader—at least versus White-led companies—in the business world. Then again, Dentsu has the distinction of officially valuing an employee’s life at 500,000 yen, which is roughly $4,400.

President and CEO made the announcement at board meeting today

Dentsu Inc., parent company of Dentsu Aegis Network and agencies like mcgarrybowen, Carat, 360i, Merkle and Isobar, is considering a restructuring plan which would see it split into an operating company and a holding company.

Dentsu Inc. president and CEO Toshihiro Yamamoto announced the proposition today during a meeting of the company’s board of directors. Implementation of the changes would be dependent on approval of shareholders at a meeting scheduled for March 2019.

According to the release, the decision to analyze the potential restructuring was prompted by a desire to “maintain and enhance” growth, as a response to “radical changes in the business environment resulting from the evolution and enlargement of business areas” and to “Establish governance that enables expeditious decision-making from medium and long-term viewpoints.”

Dentsu Inc. maintains that due to global development and rapid growth, “it has become increasingly important for the Group to make more unified and cross-sectional decisions within a set of shared values,” leading to a need to “establish a governance structure that is not restricted by the current framework of each operating company and enables expeditious decision-making from a medium and long-term perspective.”

Beyond the Dentsu Aegis Network, the larger company also operates a number of Japanese subsidiaries; this move would combine all Dentsu businesses under one umbrella, hence the “pure holding company” designation.

The announcement accompanies Dentsu Inc.’s earnings report for the second quarter and first half of 2018.

Dentsu Inc. reported that underlying operating profit on constant currency basis declined 1.8 percent for the first half of 2018. For Dentsu Aegis Network, profit decline was explained as a reflection of planned investments in global platforms and systems. In Japan, profits grew but were partially offset by planned investments in working environment reforms.

Dentsu Inc. was fined 500,000 yen (approximately $4,400) for violating labor laws last October. The “suicide due to overwork” death of 24-year-old digital account manager Matsuri Takahashi in 2015 led to the resignation of CEO Tadashi Ishii in December, 2016.