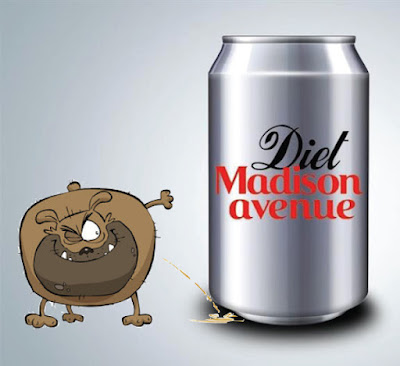 Advertising Age reported a judge allowed former CP+B CCO Ralph Watson and his legal team to serve subpoenas to ultimately identify the anonymous individuals behind Diet Madison Avenue. Based on the recent response from MDC Partners and CP+B, it’s unlikely Watson will collect much restitution from his ex-employers. It will be interesting to see if Watson inevitably receives cash from the DMA crew, as they probably have considerably less money to offer—about $2000 so far—than the White holding company and White advertising agency.

If the world were fair, here’s how things would play out. For starters, the women who claimed via Diet Madison Avenue that Watson sexually harassed them should be shielded from legal punishment and permitted to remain anonymous. Victims of such despicable behavior must be protected against public shaming and retaliation. Especially in the bad-boy culture of adland, we ought to presume that accusers are telling the truth. The DMA crew, however, does not deserve equal amnesty. After all, these folks claimed to have consulted with legal experts before launching the Instagram account. The DMA crew likely assured the true victims that their anonymity would be safe. As previously argued here, the DMA crew consciously chose a vigilante position designed to punish alleged offenders, presenting second-hand “information” as if they were eyewitnesses—and embellishing the charges with immature vitriol. Their hearts might have been in the right place, but their heads were firmly stuck up their DMA cans.

Yep, if the world were fair, that’s how things would play out. Unfortunately, Madison Avenue has consistently shown that the world is not fair.

The judge’s action is the latest development in a suit filed by Watson in May, claiming defamatory statements posted to the account led to his wrongful termination from the agency. DMA has taken aim at some of the biggest names in advertising with a goal of exposing sexual harassment and discrimination at ad agencies.

Following the lawsuit against it in late May, Diet Madison Avenue launched a GoFundMe page for its legal expenses, with a goal of raising $100,000. As of Thursday, it had raised $1,970.

The lawsuit states that the plaintiff believes the DMA account is run by at least 17 individuals “with assistance from at least another 42 individuals.” The suit cites Instagram’s privacy policy, which states the platform may access, preserve and share a user’s information in response to a legal request or when Instagram believes that is necessary to detect, prevent and address fraud and other illegal activity.

The media office for the Superior Court of California County in the County of Los Angeles, where the suit was filed, confirmed that an order granting an application to serve business record subpoenas to ascertain the anonymous individuals behind Diet Madison Avenue had been filed on Monday. According to the Superior Court’s website, the court granted the order to serve the business record subpoena to Facebook/Instagram and Gmail in a proceeding Monday morning.

“The court has determined that good cause has been shown … to allow Plaintiff to serve limited and specific business records’ subpoenas to the above-listed entities,” says the order, signed July 30 by Judge Bachner. “The court has further determined that Plaintiff has demonstrated a prima facie case of defamation necessary at this stage in the proceedings to compel disclosure of the identities of the anonymous individuals behind Diet Madison Avenue.”

Last year, a California state appeals court handed down its decision that Yelp needed to turn over documents that could identify an anonymous user who was accused of defaming an accountant in a review on its website. The appellate court in that case said plaintiffs seeking to unveil anonymous posters needed to make a “prima facie” case that shows anonymous statements are libelous and that the plaintiff can’t pursue claims without establishing a poster’s identity.

The subpoenas related to the Watson vs. Diet Madison Avenue case request from Instagram and Facebook any and all records or identifying information of any individual or individuals for the Instagram account Diet Madison Avenue (@dietmadisonave), saying that this includes but is not limited to first and last names, addresses, IP addresses and IP logs of any and all posters on the account from October 1, 2017 through the present. The subpoena to Alphabet asks for any identifying information about individuals using three different Gmail accounts from October 1 of that year.

The subpoenas ask that Instagram, Facebook and Alphabet provide records for examination by August 31. The documents say if the recipient is a party to the records requested, they must file a motion to quash or modify the subpoena and give notice of that motion to the witness and the deposition officer named in the subpoena at least five days before that deadline. If the recipient is not a party to the action, the recipient must serve a written objection to the requesting party and witness before the date set for production of the records.

Brooklyn Law School professor Jonathan Askin, a founder and director at the Brooklyn Law Incubator & Policy Clinic, said there might be a move toward no longer protecting platforms from liability for certain online content.

Askin added: “I think we might begin to see government revisit the concept of a ‘fairness doctrine,’ but this time for internet content platforms. Until 1987, the Fairness Doctrine required broadcasters present controversial issues of public importance in an honest, equitable, and balanced manner.”

“Now that the social network platforms are the place where we get most of our news, I think it is possible that governments will start to impose requirements that these platforms take steps to ensure the audiences receive access to content that is delivered in an honest, equitable, and balanced manner.”