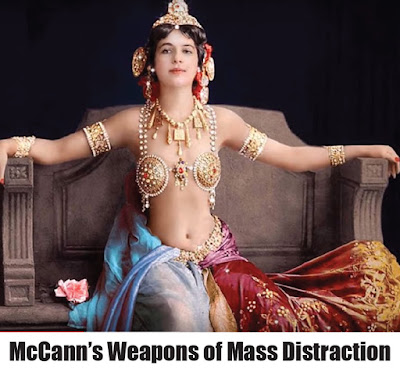 Adweek reported on the war games between the U.S. Army and White advertising agency McCann Worldgroup over the right to serve on the $4 billion military account. McCann appears to be a formidable adversary, making stealth maneuvers to retain the business via filing protests and paperwork. The latest filed complaint helps to buy an extra 90 days for the White advertising agency, as well as extend its contract. It wouldn’t be surprising if McCann uses the added time to plant a fresh female employee as sex bait. Hey, such ploys might even persuade President Donald Trump to relax his measures to seriously cut the U.S. Army marketing budget. All is fair in love and war.

McCann Files Protest After Being Eliminated From U.S. Army Review

According to multiple parties close to the matter, this protest concerned McCann’s recent elimination from the review.

The protest, which was officially filed on Aug. 8, means the Army’s decision will be delayed for another 90 days to account for the “grace period” granted to contractors lodging complaints with the GAO. It also means the U.S. government will be forced to extend its current contract with McCann beyond the expiration date of Sept. 30, which was reported by Adweek last month.

Sources told Adweek that Army representatives informed WPP and Omnicom about the delay this week. The world’s two largest holding groups are currently competing against McCann for an account that could manage approximately $4 billion in spending over a decade, by the Army’s own estimates.

This is the second time in just over a year that McCann has filed a bid protest with the GAO. Last May, the agency was eliminated from the same review on a technicality and quickly registered its objections with the U.S. government.

McCann claimed that this decision stemmed from paperwork errors made by the Army’s contracting officer at the time it initially won the business in 2005. As a result of those mistakes, the Army could not confirm the agency’s status as a certified contractor, despite the fact that it had been working on the account for more than a decade. In September, the GAO designated the protest “sustained” and McCann officially re-entered the review.

One source said the current dispute concerns documentation filed as part of the McCann network’s final proposals for the contract. According to this party, the agency was bumped from the review after some of the forms submitted to the Army were deemed noncompliant or incomplete.

Every time such a complaint is filed, the government must allow 90 days to accept or deny the appeal in question. This period ends on November 16, 2018—several weeks after the winner of the review was supposed to have been announced.

Spokespeople for McCann, Omnicom and WPP declined to comment. A spokesperson for the Army Marketing and Research Group (AMRG), which manages the U.S. military’s relationship with McCann and oversees its advertising efforts, had not provided a statement at press time.

The review initially launched in 2015, and it has now been extended several times. Additional controversies surrounded a recently completed audit conducted by the Army Audit Agency that found millions in ineffective spending during fiscal year 2016; its conclusions led to “more stringent oversight” of the military’s marketing efforts, according to an AMRG representative.