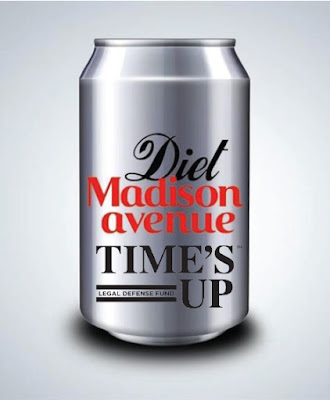 Advertising Age reported Diet Madison Avenue announced TIME’S UP is providing legal assistance to help the DMA crew deal with the lawsuit filed by former CP+B CCO Ralph Watson. However, when Ad Age probed for confirmation, a TIME’S UP spokeswoman would only say, “The [TIME’S UP] Legal Defense Fund is supportive of individuals coming forward and speaking out about sex harassment at work and in their careers; we aren’t prepared to talk about funding at this time.” Does this mean the 180 adwomen who launched TIME’S UP Advertising openly support Diet Madison Avenue? They certainly weren’t offering much of their own money for the DMA GoFundMe donation drive. And given the fact that IPG and its Chairman and CEO Michael Roth encouraged leading women executives to sign up for TIME’S UP Advertising, is it logical to conclude the White holding company would also support Diet Madison Avenue? Hey, Roth just coughed up $2.3 billion for Acxiom’s marketing services unit. Surely IPG—as a recognized leader in divertsity and inclusion—could afford to cover the DMA crew’s legal bills. Think of it as partial restitution for the Joe Alexander fiasco.

Days after a judge signed an order allowing subpoenas to unmask anonymous Instagram account Diet Madison Avenue, the account said it has closed down its GoFundMe page. The reason: DMA says it has representation from Time’s Up, the organization dedicated to addressing inequality and injustice in the workplace.

The judge’s action was the latest development in a suit filed by Watson in May, claiming defamatory statements posted to the account led to his wrongful termination from the agency. DMA has taken aim at some of the biggest names in advertising with a goal of exposing sexual harassment and discrimination at ad agencies.

Diet Madison Avenue began a GoFundMe page on May 25 to seek $100,000 to “defend our team members and volunteers against false accusations,” according to the site. The page said all funds would be used for legal assistance, with any left over being donated to the Time’s Up Legal Defense Fund. As of Monday, the account had collected $1,970. The page indicates the last donation was made around two months ago.

On its Instagram page Saturday, Diet Madison Avenue displayed a message from someone who said they had attempted to donate to the group’s legal fund unsuccessfully and it explained that the fundraising account was no longer active.

In a temporary Instagram Story, the account said “Hi fam, we actually closed it down a while ago because we have awesome representation via Times Up Now. We are all well doing great. All funds donated will actually be refunded by GoFundMe and whatever you choose not to get back will be donated to the Times Up Legal Defense Fund. For the time being we do not funds (sic) because we have a great team in place. But thanks for the love.”

In a later post, it corrected that to say “for the time being we do NOT need any funds.”

DMA did not return a direct message asking for comment at press time.

The Time’s Up Legal Defense Fund — which is housed within and administered by the National Women’s Law Center Fund — connects those who have experienced sexual misconduct to attorneys who agree to take on their cases, according to its website. The organization helps defray legal and public relations costs in certain cases based on criteria and availability of funds. Only attorneys can apply for those funds, though some attorneys will also accept reduced fees or take on cases pro bono.

Brooklyn Law School professor Jonathan Askin, a founder and director at the Brooklyn Law Incubator & Policy Clinic, said in an email that Watson’s attorneys could attempt to subpoena the Time’s Up Legal Defense Fund and the organizations funding and supporting it if they couldn’t otherwise ascertain the names of those behind Diet Madison Avenue.

“I imagine the judge would be reluctant to allow subpoenas to issue to third-party legal defense funds, opening up a hornets’ nest of potentially profound Constitutional and judicial process issues, without a compelling chance of success on the merits of the underlying claims,” wrote Askin. “Instagram would still seem the more likely source to obtain the names of those behind Diet Madison Avenue.”

The Los Angeles Superior Court order last week said the court had determined the plaintiff had demonstrated a “prima facie case of defamation necessary at this stage in the proceedings to compel disclosure of the identities of the anonymous individuals behind Diet Madison Avenue.” Last year, a California state appeals court handed down its decision that Yelp needed to turn over documents that could identify an anonymous user who was accused of defaming an accountant in a review on its website. The appellate court in that case said plaintiffs seeking to unveil anonymous posters needed to make a “prima facie” case that shows anonymous statements are libelous and that the plaintiff can’t pursue claims without establishing a poster’s identity.

Paul Alan Levy, a lawyer at Public Citizen Litigation Group in Washington, D.C., said generally speaking if a client has retained counsel for the purpose of protecting their identity, the identity of the client would be subject to attorney-client privilege. But he said Watson’s camp could argue that identity isn’t covered by attorney-client privilege. Levy said he wasn’t sure whether the California state courts had decided that issue yet, in which case it could be a decision made by a trial judge.

Levy added that when it comes to subpoenas, much will depend on how the accounts were set up and maintained, and whether the users created throwaway or fake accounts to set up its accounts.

“Or do they want to play hard to get?” he said.