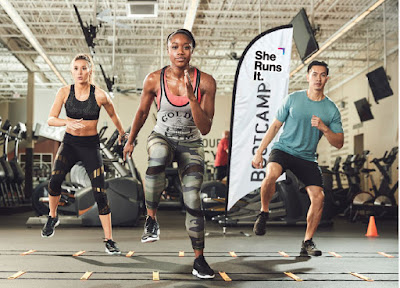 Adweek reported on the Multicultural Alliance Bootcamp held by She Runs It, presenting four “key takeaways” that are mostly standard clichéd con jobs concepts for diversity and inclusion. On the one hand, any effort designed to eliminate exclusivity deserves appreciation. Then again, the Multicultural Alliance Bootcamp warrants a few comments too. First of all, She Runs It is still more focused on promoting White women than racial and ethnic minorities. Secondly, the lead “key takeaway” regarding the Inclusion Diversity Accountability Consortium gives off an aroma of bullshit. Now there’s yet another optional measuring tool whereby White advertising agencies may sign up to possibly be deemed winners for executing what should be common practices. Finally, photos taken at the event (see below) display at least three issues: 1) attendance was low; 2) attendees were predominately female and; 3) attendees included lots of women of color. Why would women of color need to participate in a multicultural bootcamp? Talk about preaching to the choir. It feels like a clear example of delegating diversity versus engaging the culturally clueless people with hiring authority who desperately require enlightenment. It’s time to send the folks suffering from unconscious bias, conscious ignorance and blatant racism to bootcamp. 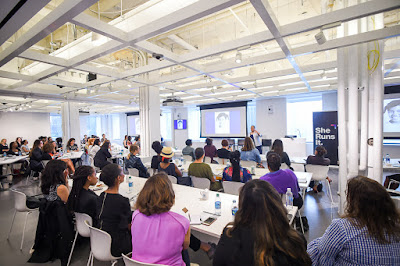 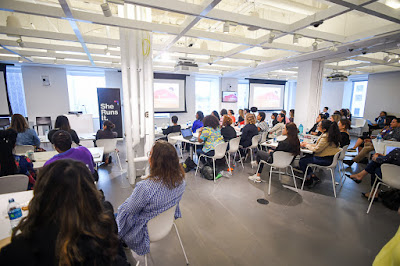 Industry panelists discussed multiculturalism at She Runs It event

Among the reasons diversity is so important in the advertising world is that advertising reflects our culture and society, and without inclusion, advertising will continue to perpetuate stereotypes about people of color and other under-represented groups, explained God-Is Rivera, director of inclusion and cultural resonance at VML. “We cringe at ads from the past,” she said. “We have a chance to change that now.”

And, while there should be more of an opportunity to tell these varied stories with all the digital venues and platforms available today, “diversity is probably what it always was, proportionate to the number of channels we have,” said actor, producer and activist Malik Yoba.

These are some of our takeaways from the bootcamp:

There is now a quantifiable way to measure a company’s diversity inclusiveness.

Companies need to incorporate diversity “because it’s right and not just because it’s trendy,” said Rivera. She Runs It has developed a way to benchmark improvements in diversity inclusiveness.

The organization just announced the winners of a new initiative it launched in coordination with Diversity Best Practices called the Inclusion Diversity Accountability Consortium (IDAC), which “seeks to ignite quantitative action that will make the marketing and media industry more diverse in its make-up and sensibility,” according to its website.

Along with Working Mother Media and Diversity Best Practices, She Runs It posted the first round of measurements and winning companies on social media with the hashtag #DBPInclusionIndex. IDAC measures companies’ success at recruiting, training and retaining a diverse workforce based on three main criteria.

These criteria are: Best practices in recruitment, retention and advancement of people from under-represented groups; creating an inclusive culture through leadership, accountability, communications and employee engagement; and transparency in willingness to share workforce demographic data.

While the organization has released stats on select companies, it will present this information more comprehensively during Advertising Week in October.

In promoting diversity, you need to think about your own circle first.

On a panel called “Champions on the Front Line,” Patty Kim, director of talent acquisition at Conductor, talked about the importance of starting with yourself and your own innate biases before trying to advocate for diversity. You need to think about your own circle, the group of people you go to for ideas, support and growth.

When Kim first did this exercise, she realized her circle was fairly homogenous in thought—it did not represent a diverse community. “You need people who really challenge your ideas,” she said. “Inclusiveness starts with yourself—then you bring it to the workplace.”

You don’t have to be at the top to make a difference.

While it certainly helps to have an ally in a leadership position, “if you have a seat at the table, you can have influence,” said Frankel, adding that you should never give up, even if that means slowly chipping away at established ideas.

One of the best ways to do this is to tell your own story, said Francine Tamakloe, associate in the AMP development program at Spotify. “Being in the room and telling your own story inspires others and saves others,” Tamakloe said in a panel called “Women on Fire.” And while it can be easy to be inspired by others around you, it can sometimes be hard to “see the warrior in yourself,” she added.

“Define what a champion looks like to you, and be it for someone else,” Frankel said.

But don’t just be a champion for people underneath you—people above you need support as well. “It can be so lonely at the top,” said Judy Jackson, global chief talent officer at Wunderman. “You can champion people at every level.”

Small interactions can go a long way toward effecting change in the workplace.

Sometimes change comes from micro-actions, said Jackson, recounting an incident in her office when someone who wasn’t from the U.S. asked her African-American assistant about the semantics of the N-word. While initially an awkward situation, it became a positive learning experience, Jackson said, as her assistant explained the word’s history and why it was not okay for the coworker to use the term.

“She was curious, but that was a sign of change. I was proud of that moment,” Jackson said. “Change comes from being able to ask people of color about their lives.”

Hiring managers are not the ones currently out there pushing diversity, explained Frankel, highlighting that we need to think about aspects like where we post jobs. Inclusiveness might mean creating new positions in the workplace, added Rivera. “Organizations should invest in their women,” said Yai Vargas, founder of The Latinista. “They should pay to send them to conferences like this one.”

And to usher in a new generation of diverse storytellers and marketers, educators should show young people of color that there are options for kids in advertising, Jackson added, saying, “Agencies should go talk to kids.”