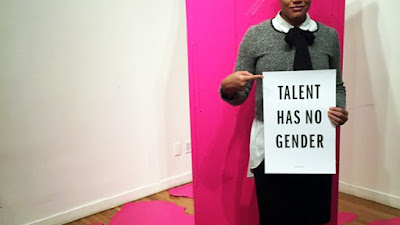 Adweek reported on the latest propaganda from The 3% Conference: a certification program to designate advertising agencies as friendly advocates of gender equality. Agencies could be certified upon submitting data on women staffers, followed by successfully meeting suggested goals. If this goofy idea takes off, someone should file a major league lawsuit against the industry. After all, White holding companies and White advertising agencies have steadfastly refused to openly publicize staff figures for minorities—so suddenly sharing such information on White women in the field would be, well, certifiably obscene.

The 3 Percent Conference has a new plan for promoting gender equality at America’s advertising agencies: It’s introducing a certification program. The advocacy group announced the initiative at its New York conference today, equipped with data from a study that details what 328 women working in agencies really want.

The seal of approval—introduced by twtw Companies president Erin Carpenter and Accelerating Women founder and CEO Lisen Stromberg—is called “3 Percent Certified.” The program will certify agencies that not only set out to promote equality, but make real changes to their organization along the way.

“We are going to go out and talk to the talent, find out what the talent is experiencing, look at the individual agency’s programs, cultures and community and go beyond that to see what’s the benchmark, not just in the industry but outside the industry,” Stromberg said. “You can find out, how is your agency doing and what can your agency do to make changes?”

When an agency applies for certification, an independent auditing committee will collect information on salaries, the breakdown of men and women in leadership positions, and more. Then, the group will suggest benchmarks along with ways to reach a more balanced agency. If the shop can successfully hit those goals, it will be certified.

“We’re not going to be unrealistic and say to an agency that’s 8 percent women to be 50 percent in a year, but we will have reasonable, attainable goals that will move that needle,” Carpenter said.

While 3 Percent Conference founder Kat Gordon had the idea awhile ago, Carpenter said the organization had to prove that placing more women in leadership roles leads to happier employees and better work cultures. Once the study on what ad women want was complete, it provided the necessary data to kick the certification program off.

The 3 Percent Conference study showed that while 56 percent of women reported they were making an adequate salary ($100,000 a year or more) and 78 percent stated they were satisfied with their current roles, 30 percent have no female leaders to look up to. An additional 60 percent reported that their agency was below the new standard of 11 percent of females holding creative director roles.

At agencies where women make up at least a quarter of the creative leadership, women reported higher levels of job satisfaction, better pay and fewer instances of discrimination than other agencies. For instance, 64 percent said they earn over $100,000, compared with 54 percent of their counterparts at more male-dominated agencies.

“Integration of data and the importance of having analytics to drive what we are talking about just became much more important. It became less abstract and more concrete. We were able to track what happens when the leadership ratio goes up a bit, and we’re seeing a real impact,” Carpenter said.

I am going to be so exceptionally disappointed if the 3 percent women get the agencies to release gender information, and leave ethnicity completely off the table.

They've got this incredible opportunity to start righting two wrongs at once, racism & gender issues inside agencies, so why do I get the feeling that the agencies and holding companies will offer of male/female hiring stats and totally "forget" about color?

Or worse, do something like "Oh, between our offices in New York and Shanghai we have 40% women, 60% men, and of course 30% of our hires are Asian! Look how diverse our agency is!"

Have you ever been to a 3 Percent Conference event? The ironic thing is that it's about 97% white women, with one or two black women who have been invited to speak yet somehow end up in the promotional photos and Twitter feed to make the event and industry look much more diverse than it actually is.

The 3 Percent movement has the power to ask ad agencies for their ethnicity numbers, but they won't. They're hyper focused on creating even more opportunities for their core membership, ie white women, and everyone else is secondary.