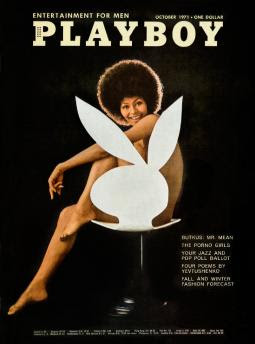 Magazine may compete with Esquire and GQ

That old line about “reading Playboy for the articles” is about to become a lot more legitimate. This morning, Playboy announced that beginning in March 2016, it will no longer run nude pictures in the magazine. While the move has been attributed to the rise of Internet pornography—after all, who really needs to buy magazines to see naked women in this day and age?—there’s another important factor at play: Fewer nudes may mean more advertiser dollars.

The safe-for-work approach has certainly benefited Playboy.com, which underwent its own nudity-free revamp in August 2014, shifting focus to more Facebook-friendly lifestyle and entertainment content. Since then, the site’s average monthly unique visitors have increased by 400 percent, and median reader age has dropped from 47 to 30, according to the company. The site has also managed to attract advertisers like Stoli Vodka, Hornitos Tequila and The Weinstein Company.

By instituting similar changes in the magazine—among them, higher-quality paper stock, more coverage of visual artists and liquor content, per the New York Times—Playboy might hope to compete with men’s magazines like GQ and Esquire for high-end fashion, automotive and spirits advertisers.

The no-nudity move could also help broaden Playboy’s appeal among mass brands that tend to be more conservative. “This opens up the conversation to marketers hesitant to go into what was a highly provocative environment,” said Robin Steinberg, evp, publishing and digital director, investment activation at MediaVest.

Whether advertisers really will embrace the “new” Playboy remains to be seen. But even if brands bite, the magazine will still need to win over its target millennial audience. “Readers and revenue are the two most crucial factors for success,” Steinberg said.

Take, for example, former laddie magazine Maxim, which relaunched in an attempt to reposition itself as a destination for stylish urban males. Since then, the magazine’s fashion advertising has grown, but newsstand numbers are still struggling: According to the Alliance for Audited Media, single-copy sales dropped 36 percent in the first half of 2015.

When there are more minorities on stage at a Republican debate and in the pages of Playboy than inside Madison Ave. ad agencies, you have a diversity problem.