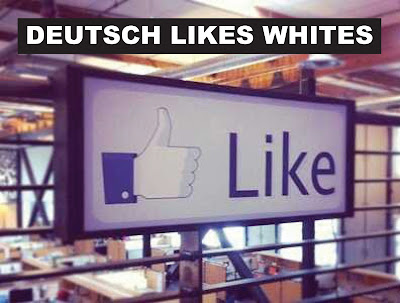 Business Insider reported Deutsch has been using social media like Instagram and Reddit to find and recruit talent. Deutsch Chief Creative Officer Pete Favat explained, “The idea of hiring people in advertising is over. We will just regurgitate what has already been done. If advertising continues to copy itself and take influence from itself, that’s why people will get put off of advertising.” Besides not being very articulate, Favat is full of shit, as Deutsch is completely guilty of employing all the same hiring and promotion tactics that have kept the industry exclusively White for decades. Then again, social platforms such as Instagram allow Deutsch to more quickly identify candidates as being Caucasian, ultimately streamlining the staffing process. According to Business Insider, “Deutsch is telling the entire agency to ‘stuff yourselves with culture as much as possible’—paying attention to Instagram, Vine, art, comedy, shows on Netflix—and keep an eye out for potential new hires.” Um, the last time the White advertising agency gave its employees Internet-related instructions, the place wound up getting seriously spanked by the FTC.

Recruiting for new young creatives to join the ad agency is a tough job at the moment.

At one time, the competition for creatives was just between other agencies and brands’ marketing departments, Winston Binch, chief digital officer at ad agency Deutsch, told Business Insider: “Now we compete with BuzzFeed, Vice, Google, Facebook, or what we call ‘two f—kers in their garage’ — everyone is in the marketing business now.”

But rather than fight against the democratization of tech and the ease at which people can publish their creative efforts, Deutsch has embraced the internet, by using it to be more creative about the way it recruits talent.

Instead of looking to other ad agencies, or people that have just finished college marketing courses, the agency is actively seeking out “internet kids.”

Pete Favat, Deutsch chief creative officer, said: “The idea of hiring people in advertising is over. We will just regurgitate what has already been done. If advertising continues to copy itself and take influence from itself, that’s why people will get put off of advertising.”

Deutsch discovered brothers Bryan and Beau Abbot through their “Baseball Card Vandals” website and Instagram account, which sees the pair sabotage baseball cards with funny illustrations. Neither had worked in advertising before, but now they are an art director and copywriter, respectively, working on the Sprint account.

Dan Atwater joined as a junior art director, but was found by Deutsch staff via his “kickass” Instagram profile, in which he cleverly repurposed his creative portfolio.

Meanwhile, Kurt Gassman was offered a place on the agency’s “DPrep” summer residency in Los Angeles because he made an unusual application via Reddit. He posted a series of images transforming his paper job application into an origami crane, that he took wherever he went.

Deutsch duly responded by sending his acceptance letter back via Reddit too.

Deutsch is telling the entire agency to “stuff yourselves with culture as much as possible” — paying attention to Instagram, Vine, art, comedy, shows on Netflix — and keep an eye out for potential new hires. “Talent is everyone’s job,” according to Favat.

It’s that kind of thinking that saw the agency hire TJ Miller, the comedian, writer, and actor from the HBO show Silicon Valley. He’s been brought in as a freelance writer when he’s not on set.

Binch said: “What makes this place different is that we’re passionate about innovation. We are investors and we invest ahead of revenue and that’s very rare for an ad agency — most of which are just busy managing their margins. And that’s the quickest way to die. Invention and innovation has to be the biggest part of our business model. We’ll make mistakes, but that’s what makes it exciting for us.”

Both Binch and Favat admit that hiring “internet kids” hasn’t always worked — and it’s too soon to say whether they’ll go on to get senior roles — but they encourage other businesses to adopt a tech-like “fail fast” attitude. They believe the larger business community — banks, retailers, healthcare companies — should be hiring “internet kids” too to bring new thinking into their sometimes stodgy organizations. Those kinds of people are more likely to bring ideas that a fan — not a corporation — would make, they added.

Look at their hires after scouring the Internet. You have to work really, incredibly hard to hit the all-white hire jackpot like they did if you're using social media as a starting point. Black, Asian and Latin@ adoption of social media is much higher than their white counterparts.

So how did Deutsch do the impossible, which was to reach out, ignore the massive numbers of minorities using social media, and find and hire only white agency "talent?"

Easy. Like all white Americans, their mostly white social circle in real life extends online as well. That's what happens when you only have 1 black friend out of 99 white ones on average:

It's a self-defeating all-white prophecy.