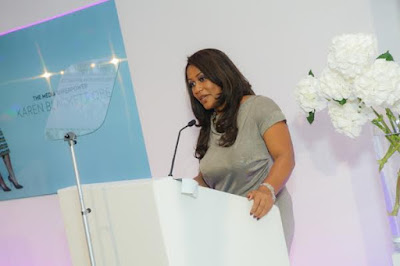 Campaign reported MediaCom CEO Karen Blackett was named among the Top Ten Inspirational Women by Marie Claire. Are there even ten Black women in the UK advertising and marketing industry? Given Blackett’s accomplishments, you’d think she would serve as inspiration for adland to ignite its diversity efforts.

Karen Blackett, the chief executive of MediaCom, has been named as one of Marie Claire’s ten most inspirational women at its Women At The Top Awards.

The annual awards, hosted by the magazine’s editor-in-chief, Trish Halpin, honours ten female “game-changers who have shaped 2015”, from business to the arts.

Blackett was included on the list after topping the Powerful Media ‘Power List’ as ‘the most influential black person in Britain’, as well as being in charge of a budget of more than £1.2 billion and helping launch the first government-backed apprenticeship scheme for the creative industry.

She said: “I create a culture where you’re allowed to bring yourself to work. I want to recognise if some of our female talent is struggling with blending their work and home lives. We have many family-based initiatives [new mothers receive one week’s salary as a “baby bonus”, and their wage is raised ten per cent in the first year after they return to help with childcare].

“I regularly ask the team to tell me what they’d do if they were CEO for the day. Then we implement the best ideas. One of the winning ideas was introducing life coaching for everybody at the agency; we’ve now got a happier, more productive workforce and a better, profitable business.”

Destiny Ekaragha, filmmaker and only the third black female director to have released a feature-length film in the UK;

Paula Hawkins, writer of the bestselling novel, The Girl on the Train;

Emily Rawson, a DJ and founder of the all-female DJ collective, Rock the Belles;

and Josephine Goube, the director of strategic partnerships at Migreat, an online platform helping individuals with immigration.

It's nice to see a black woman in a power position in media.

As if serving as a human body block stopping the flow of actual diverse hires in one direction, and lawsuits from Cyrus Merhi coming from the other direction, were something to be proud of.