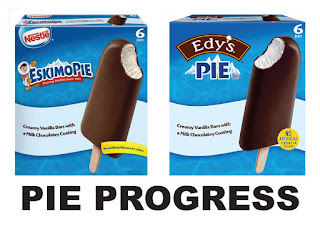 Advertising Age reported Eskimo Pie is becoming Edy’s Pie in another attempt to erase the racism from popular brands. Ironically, removing cultural cluelessness means the representation of Indigenous people in advertising and branding is vanishing too. Plus, the public is losing the perfect dessert to celebrate Indigenous People’s Day.

The name change gives the marketer the chance of a refresh without the word “Eskimo,” which has been called out as a culturally insensitive reference to indigenous people.

The new name carries recognition in the eastern part of the U.S., where Dreyer’s Grand sells ice cream under the Edy’s brand name. But the company’s ice cream products carry the Dreyer’s name in markets west of the Rocky Mountains, and in Texas. The two product lines are named after the company’s founders, Joseph Edy and William Dreyer.

Now, Edy is getting another product named after him. “The name Edy’s Pie was chosen in honor of one of our company’s founders, candy maker Joseph Edy, as well as a form of tribute to the entrepreneurial origins of this treat,” Elizabell Marquez, head of marketing for Dreyer’s Grand Ice Cream, said in a statement.

The name change follows news that several brands are considering updates to distance themselves from brands that they now admit carry racial stereotypes or connotations no longer considered appropriate. Uncle Ben’s will be renamed Ben’s Original. Aunt Jemima is also set to announce a new name.

The Eskimo Pie product—but not the name—was concocted 100 years ago when Christian Kent Nelson, a candy store owner, came up with a way to coat ice cream with melted chocolate. It’s an idea Nelson worked on after a boy who visited his shop couldn’t decide whether to spend his nickel on ice cream or a chocolate bar. The product was called an I-Scream Bar, the story goes, and later was rebranded as Eskimo Pie when Nelson partnered with the chocolate maker Russell Stover, who is believed to have requested the name change.

As for the name Edy’s Pie, Dreyer’s Grand came up with the name internally. Design agency GRO is doing the packaging design adaptation.

A packaging image shared by Dreyer’s Grand shows the word Edy’s in its signature design, curving over the word pie, which is shown in all caps in front of snow-covered mountains. The image of a child in a furry coat is absent from the new design.

Production of Eskimo Pie products was paused and the company anticipates the Edy’s Pie bars will be in freezers in early 2021, Marquez said in a statement.

Food Dive, which covered the name change on Oct. 2, points out that going with the Edy’s name gives Eskimo Pie a name “with less brand equity and recognition.”