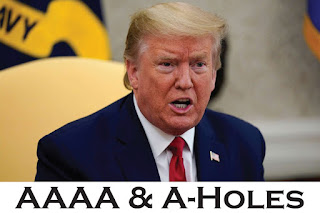 The order states that any contract with a White ad agency could be “canceled, terminated, or suspended in whole or in part and the contractor may be declared ineligible for further Government contracts” if it is found that the agency implements training in violation of the stipulated guidelines. In short, violating shops could lose lucrative contracts with entities like U.S. Army, U.S. Census and more—perhaps even Ad Council too.

There is serious irony and karma at play here. After all, White ad agencies have traditionally won governmental assignments by creating the illusion of diversity via “partnerships” with minority firms, covertly establishing separate and unequal unions. Trump’s order is inadvertently exposing the hypocrisy and deception—and slamming the brakes on the biased bullshit.

Plus, it’s no secret that Trump strikes back at people he perceives to be enemies. So maybe the order is delayed retaliation for White ad agencies openly expressing disdain for the president. Although MDC Partners won’t have to worry about this possibility…

The truth is, White ad agencies are probably quietly applauding Trump’s move, as it provides them with an excuse to continue ignoring diversity.

The American Association of Advertising Agencies (4A’s) is pushing back on U.S. President Donald Trump’s new executive order that prevents federal contractors, including ad agencies, from implementing diversity training that would seem to cover such issues as unconscious bias.

Alison Pepper, executive VP of government relations for the 4A’s, tells Ad Age that the trade body for advertising agencies is joining “several leading trade associations and companies that represent a broad array of industries to push back on this Executive Order.”

“We are reaching out to the appropriate parties at the Office of Management and Budget and Department of Labor to outline the many logistical problems associated with this [order],” Pepper says, “not to mention the significant expense faced by thousands of companies.”

Pepper says it is too early for the 4A’s to provide guidance to member agencies until it has a “better understanding of what the final [Department of Labor] regulations may look like. There will hopefully be some clarity on these important procedural matters soon so that agencies and other industries can understand what is expected of them,” she says.

Marla Kaplowitz, 4A’s president and CEO, added that the order, signed by Trump on Sept. 22, would upend the programs that agencies have “heavily invested in to hire, recruit and retain diverse and inclusive workforces and boards.” All of the holding companies and many agencies have made even further investments in diversity training in the wake of the killings of George Floyd, Breonna Taylor and Ahmaud Arbery. For example, WPP and Publicis Groupe committed $30 million and $50 million, respectively, to diversity, equity and inclusion efforts that would include employee training.

“As this Executive Order prohibits employee training on topics such as ‘stereotyping’ and ‘scapegoating’ based on race or sex—ambiguous terms that even courts of law have trouble parsing and applying—it complicates how agencies can evaluate their employee training programs for compliance,” Kaplowitz says. “At large, this Executive Order undermines important investments agencies are trying to make at a time when many Americans are asking what they, and the industry, can do to create a more diverse and equitable workplace.”

The executive order, titled “Combating Race and Sex Stereotyping,” states that a contract with an agency or other federal contractor can be “canceled, terminated, or suspended in whole or in part and the contractor may be declared ineligible for further Government contracts” if it is found that the organization in question implements training that goes against its guidelines.

As defined by the order, “divisive” training includes “concepts that (1) one race or sex is inherently superior to another race or sex; (2) the United States is fundamentally racist or sexist; (3) an individual, by virtue of his or her race or sex, is inherently racist, sexist, or oppressive, whether consciously or unconsciously.”

The Department of Labor has been ordered to set up a hotline and investigate complaints of a federal contractor reported to be participating in such training.

Psychologists and other experts have long studied the adverse effects unconscious bias has on society, specifically in perpetuating systemic racism, and it is an issue that many agencies tackle through their diversity training.

According to several holding company executives, many with government contracts, the executive order has caused a lot of confusion and concern. They maintain though that diversity remains a focus.

Martin Sorrell, S4 Capital founder and executive chairman, commented on the order on an Advertising Week panel today, saying it’s “thrown a lot of confusion into the ring” for agencies and consultancies currently holding and pitching government contracts.

Two executives at different holding companies, who spoke on condition of anonymity, told Ad Age that they are holding out hope that the executive order will be deemed unconstitutional before it becomes law. Also, they say the order seems to only pertain to new government contracts, not existing ones.

One of the holding company executives said the “hope is we never really have to worry about this.”

“Until it becomes law and incorporated in our client contracts, we will continue our current training program and requirements,” the other holding company executive said.

If it does become law, however, the order could undoubtedly stymie the progress agencies have made in the past few months to create a more equitable industry.