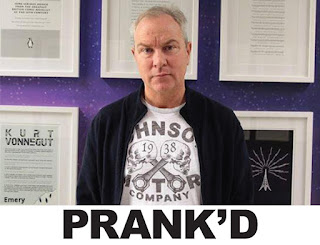 Advertising Age reported WPP fired Mindshare CEO Nick Emery “following a clear breach of the company’s code of conduct.” However, Ad Age—like most other sources covering the event—did not offer any further details. Meanwhile, Campaign chipped in that Emery pulled a “prank” during an internal videoconference described as “juvenile”, “idiotic”, “schoolboy” and “lavatorial”—but was not “really awful” or involving “race, fraud, an inappropriate relationship or malice.” Wow, based on all the disqualifications, Emery’s deed must have been extraordinarily stupid. Emery and The Richards Group Founder Stan Richards are the Jerky Boys of 2020.

In a terse statement, the company said that Emery “has left the business with immediate effect following a clear breach of the company’s code of conduct,” adding that GroupM CEO Christian Juhl will take over the role on an interim basis until a successor is named.

No specific reason was given, but the company included a quote from Juhl that reads: “At GroupM and our agencies, we believe everyone should experience an inclusive and respectful workplace culture. Inappropriate and offensive behavior is not tolerated in our company, and when we see any employee breach our code of conduct, we take swift action. Mindshare is made up of thousands of dedicated professionals who deliver our promise of making advertising work better for people around the world. We know they share our vision and values and are focused on the future of the business and the needs of their clients.”

Emery, who is based in London, had been with the media agency for 23 years, according to his LinkedIn bio.